Mona Singh, in this fun interview, shares some of the most unknown facts about her.

Mona Singh is an actress who has made her place prominent in both television and Bollywood film industry. She started her acting career in 2003, and with her very first role, she became a fan-favourite. She has also extended her career to OTT platform. You can watch her in the shows Mission Over Mars, Kehne Ko Humsafar Hain, and Black Widows on ZEE5. To know more about this beautiful and talented actress, we asked her some questions. Take a look at this super fun and interesting interaction.

Are you a morning person or a night person?

Mona Singh said that she is a morning person and that she loves waking up early.

The Black Widows actress said that she used to like tea before her marriage but now like coffee more. She said, “Before marriage, my mom used to make tea for me and I used to get bed tea. I loved it. But since my husband is a South-Indian, he prefers coffee. So I’m also liking it and I’m more into black coffee.”

The actress said, “None. I like to walk. I got bored with gym and yoga is okay sometimes.”

Mona Singh said that she likes listening to ‘Ek Onkar Satnam’, saying that it energizes her.

What was the last thing you bought under Rs 100?

The actress said that it was a pretty mask that she bought in Manali, for Rs 50.

One thing that makes you angry?

Mona Singh revealed that when her house is not kept clean and tidy, it makes her mad.

For you, what is marriage?

Mona Singh said that for her, marriage is partnership and companionship.

A bad habit of yours that no one knows about?

The Black Widows actress revealed that she tends to overeat and feels that it is a terrible habit of hers.

Have you ever used your star status to getaway?

She revealed that she has done it once, and very recently so. She said, “While returning from my recent trip to Manali, there was a long queue at the airport. I looked at the cop and he recognized me and let me cut the queue. My husband said that it was mean of me but  I thought once is fine.”

What was the last lie that you said?

To this, Mona Singh said that she hardly ever lies, so can’t remember what it might’ve been.

A strange rumour you heard about yourself?

The actress said, “In 2018, I heard this rumour that I am dead! All my relatives and friends called me up and told me that they heard it from some video, on YouTube, about celebs who had passed away in 2018 and my name was in that list.”

How would you like to spend your last day on Earth?

“I would like to go travelling! I would like to try things like skydiving, riding a bike, talking to strangers, and then spend time with my family and loved ones,” Mona Singh said.

What is your idea of a perfect date?

The actress said that her perfect date would start with a drive, where the car and the guy should smell nice, there should be romantic songs playing in the car, leading up to a nice and quiet restaurant, where good music is playing. She said she would also like a little dance and a lot of laughs on the date.

Mona Singh said that her favourite holiday destination is the Ko Phi Phi islands in Thailand.

“In a relationship, I will never…?”

“Cheat or disrespect,” said the actress.

Life in one word for you is?

The Black Widows actress said that the quote for her is ‘go with the flow.’ She said, “I like to live by it, never planning anything and always going with the flow. That way I feel completely in sync with the universe.”

If not an actor, what would you be?

Mona Singh revealed that she would be a chef, if not an actor. She said that she cooks Indian meals the best.

One celeb you would like to get stuck on an island with?

Mona Singh said that it would be Brad Pitt. She said that she loves the actor.

The silliest thing that you last searched on Google?

Mona Singh replied that she searches ‘How to lose 5 kgs in one week’ every time she eats a lot and puts on weight.

Describe yourself in 3 words.

Happy, effervescent, and positive are the words that Mona Singh would describe herself with.

She said that she preferred texting and that she doesn’t like answering calls.

She said that she would choose love over money.

Mona Singh would want beaches or preferably, a combination of both.

“Jassi. She will always hold a special place in my heart,” she said.

How did you convince yourself to play a killer, Veera, in Black Widows?

She said that she didn’t have to do that to play Veera. Mona Singh said that she was super-excited about the role because people had never seen her in such a role or in crime drama before.

If Veera had to give one marital advice to Mona Singh, what would it be?

The Black Widows actress said, “Don’t judge the book by its cover. That is because all that happened between Veera and Jatin was because Veera misunderstood Jatin on seeing his actions. So to not keep preconceived notions would be the best advice.”

One Black Widows co-star you would want to work with again?

One memorable dialogue from the show?

Mona Singh said that her most favourite dialogue was in the scene when the cops come to the farmhouse, looking for mutton and they ask if the women also came back to the farmhouse just to take the mutton. To this, Veera says, “Toh kya, chhod dein? Ek to pati bhi nai raha aur 700 kg mutton chhod dein?”

Most challenging scene to shoot in Black Widows?

For Mona Singh, the most challenging scene to shoot was when Jatin comes back. She said that she did not know how to properly react to it and kept going back to the director because she wanted Veera’s reaction to be perfect.

One thing about Shamita Shetty that not many people know?

“She loves to eat cakes. She’s so slim and fit, so no one would think that but she loves to dig into desserts,” said Mona Singh about her co-star in Black Widows.

One thing about Swastika Mukherjee that not many people know?

“She’s an open book. I think people know everything about her because she shows her real self all the time,” Mona Singh said about Swastika Mukherjee, who plays Jayati in Black Widows. 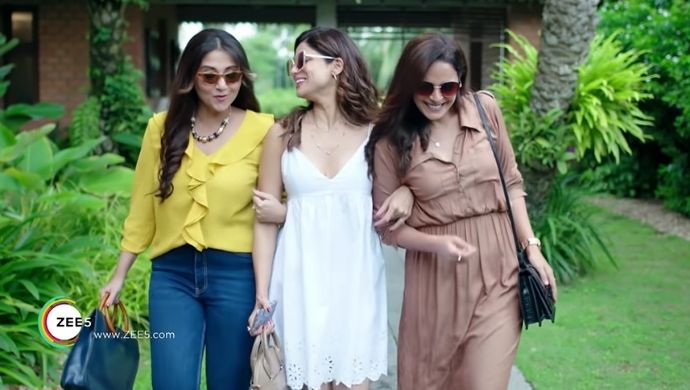 3 reasons for the people to watch Black Widows?

Watch her in the shows Mission Over Mars, Kehne Ko Humsafar Hain, and Black Widows on ZEE5.