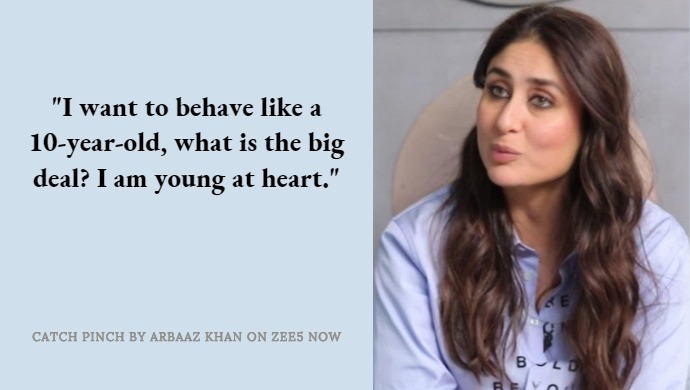 Bollywood superstar Kareena Kapoor Khan was the first guest on Arbaaz Khan’s new show Pinch. During her appearance, the Veere Di Wedding actress spoke at length about using social media, trolls, son Taimur Ali Khan and a bit about her co-stars too!

You can watch the first episode of Pinch here:

It is rare that Kareena is spoken too and juicy revelations don’t hit the headlines. Her tete-a-tete with Arbaaz was no exception! Take a look at 10 juicy revelations that proved Bebo brought her bold, bindass and badass self for the chat. One of the social media users reprimanded the celebrity for “behaving like a teenager” and that she is a mother now. Needless to mention, her reply was savage!

2. On being called "size minus" 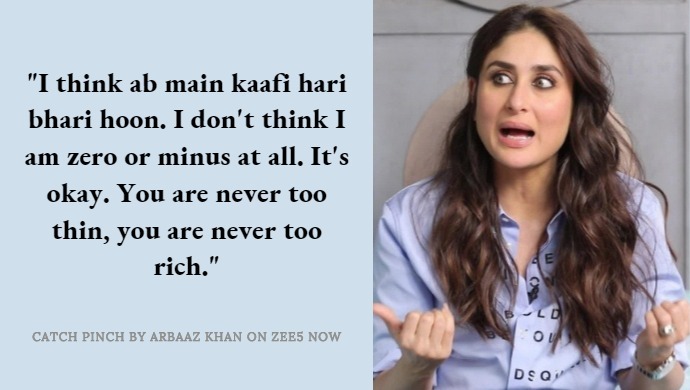 A troll Kareena read on social media said that she is not size zero any longer but size “minus.” Bebo responded saying she is quite “hari bhari” and has worked hard to shed off her pregnancy weight.

A quick trivia: Did you know Kareena lost 23 kilos in one year? For those who planned to skip the gym today, hope you are reading this!

3. On the nation "getting tired of Taimur" 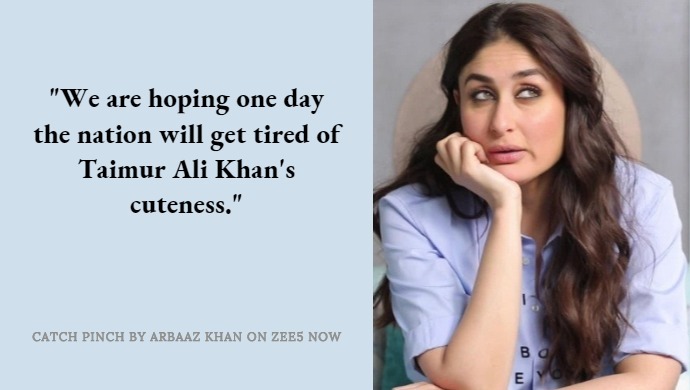 Taimur Ali Khan is a newsmaker! Whether he cries or walks or talks, everything about the literally blue-eyed boy makes headlines. Although Kareena feels that the euphoria around her son needs to be curtailed, she is hoping that the nation will get tired of her baby boy one day.

4. On being "criticised on social media" 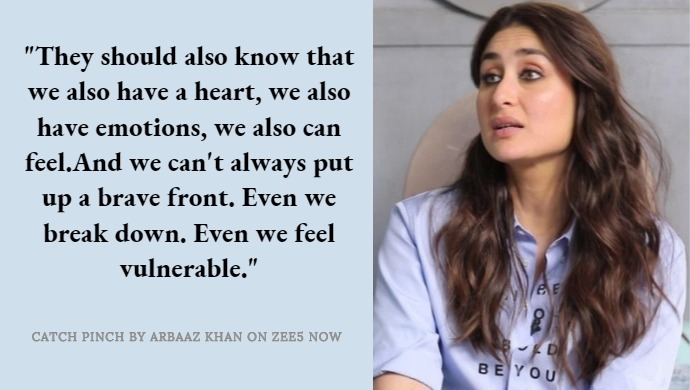 When asked what pinches her about social media, Kareena answered, “The ignorance of people. Celebrities, actors, actresses don’t have any feelings. We are just expected to take criticism and praise with a pinch of salt. Which is fine. Which we do.” She further added how people should understand that celebs are normal human beings too! 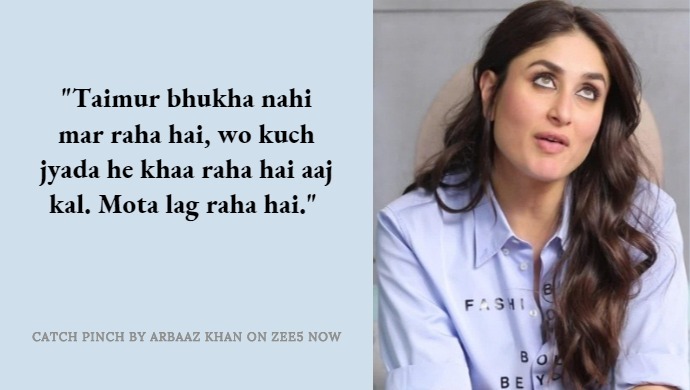 Interesting and amusing as it comes, a user wrote on social media that Taimur looked as if he is starving. Trust his yummy mummy to shut down trolls like a boss!

6. On dolls being made out of Taimur's looks 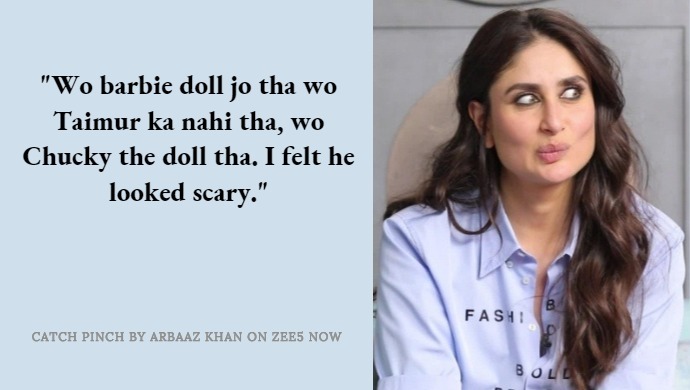 Talking about Taimur dolls that went viral on social media recently, Kareena said it didn’t look like her son at all. She further added, “I felt he looked scary. I think they just made a doll, they made him wear a bandhgala, I think ek baar Taimur got photographed with a bandhgala, toh ek pehna diya and it just like put blue eyes and said its Taimur. It didn’t look anything like Taimur. I was like how can you just sell this doll calling it Taimur? That is wrong. “

7. On Taimur being called biggest Khan of India 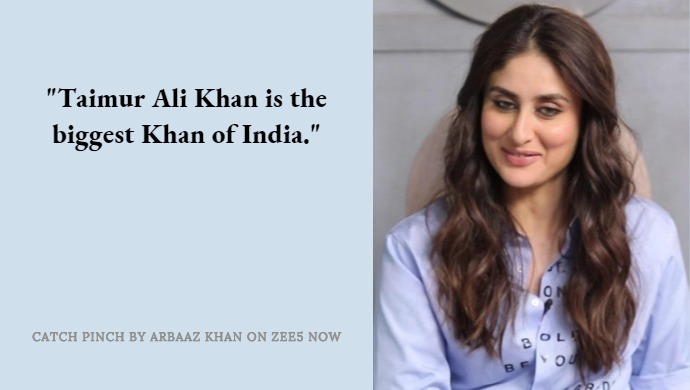 Pinch mainly deals with the trolls and adulation celebrities are subjected to on social media. While Taimur is not a celebrity, he is the nation’s baby crush nonetheless. Thus people write all kinds of things about him! One user even called him the ‘Barbie of India’ and ‘biggest Khan of India.’ And Kareena couldn’t agree more!

8. On Taimur's nanny being paid more than Ministers 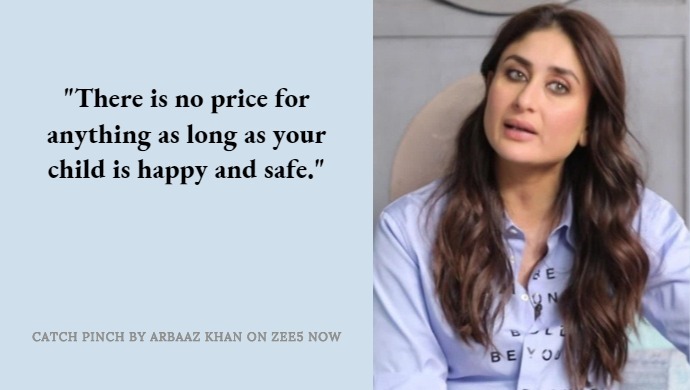 It has been said and reported that Taimur’s nanny gets paid more than several Ministers in India. A quick-witted Kareena chuckled that “that should be addressed with the Ministry.” However, she stressed how the “idea is the child has to be happy and in safe hands,” regardless of whether you pay Rs 1 lakh, Rs 2 lakh or even Rs 1000.

9. On stalking celebrities on social media 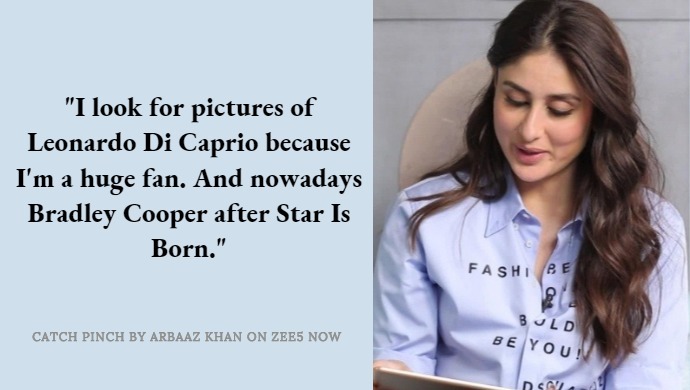 Unless you are living under a rock, you’d know that Kareena is a fan of Oscar-winning Hollywood actor Leonardo Di Caprio. She revealed that she looks up on social media for pictures of him, and even A Star Is Born actor Bradley Cooper. 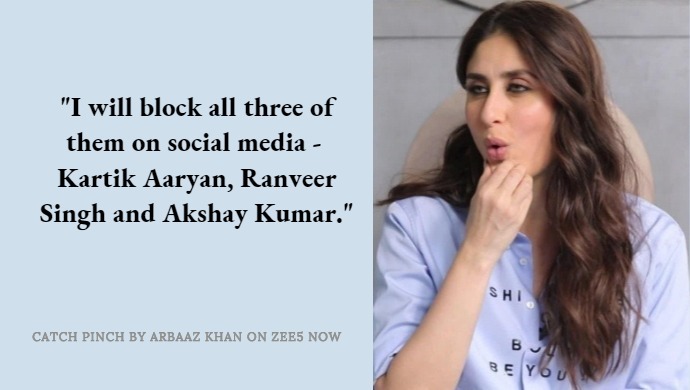 Kareena was asked to choose between Kartik, Akshay, and Ranveer to follow, block and unfollow them on social media. She chose to block them all!

P.S. Akshay Kumar knows the password to Kareena’s phone! He took a guess at Bebo’s password combination and got it right at the second go.

So that was Kareena’s brief yet extremely entertaining appearance on Pinch. Stay tuned for more celebrities to follow!