Dwayne Johnson all set to clear his mess, fans are amused

Dwayne Johnson every then and now advises his fans on almost all the topics of life. And in his latest social media post, he is back with it. Reactions of fans are hilariously funny to downright serious.

Dwayne Johnson is known for his stylish attire, great sense of humour, a muscle beast and for being a complete Hollywood package. From Thrilling action scenes to romantic and comedy scenarios, Dwayne nails all of them, that too in style. However, another side of the artist is his attachment with his fans.
The latest advice
In the early morning this Friday, Dwayne Johnson, the professional wrestler cum actor, took to Instagram to share his latest routine with his fan. As one can see in the post, the Rock has his MacBook Pro along with a to-do notebook with a pen over it. 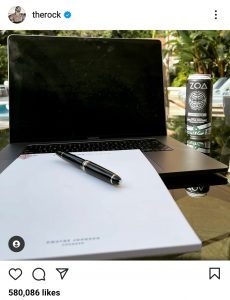 The Scorpion King, in his caption, has defined his plans for his latest task visible in the photo. The carefully written caption suggests that Dwayne will be setting big goals, bringing in big changes and how he would deal with things that have his passion and focus and things that he needs to remove from his life.
Later on, Dwayne Johnson, who enjoys a mammoth fan following of over 271 million fans on Instagram, advise his fans to write things down so that, if they haven’t tried. 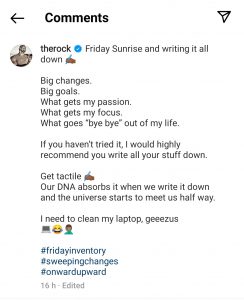 Dwayne also manages to tell his own fact in the post where the 49-year-old actor claims that if we write things down, then they become clear, and half of the work gets already done.
Nonetheless, as Dwayne Johnson is known for making people around him laugh, he did the same in his latest post. In the last line, the rock stresses how hard he needs to get his laptop clear. Thus, providing a satirical ending to his post.
Updates
Dwayne Johnson had recently wrapped up his latest work as the Hollywood actor got his final voiceover recorded for the upcoming DC’s League of Super-Pets. Dwayne will next appear in action-comedy Red Notice, releasing on the 12th of November this year. He will also appear as Black Adam in his upcoming 2022 movie, another DC Title, Black Adam.