Suman Shekhar, 21, a graduate in Journalism from Delhi along with his teammate Kumar Sanket is tirelessly working for few years virtually and since the last one on the ground for the betterment of the district. In the same quest, he has been running a campaign for the last few months to improve the dilapidated […] 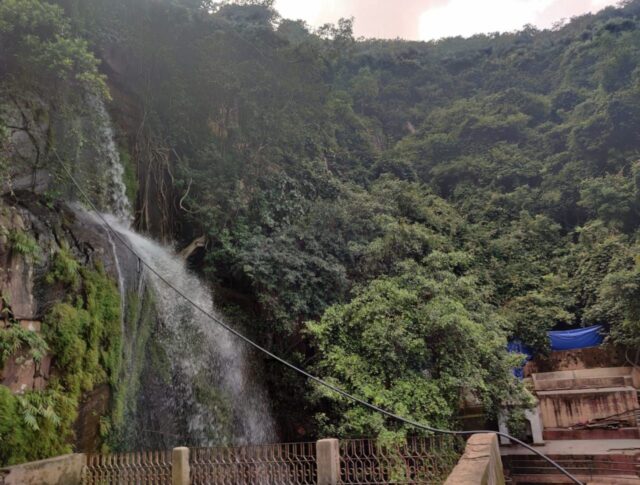 Suman Shekhar, 21, a graduate in Journalism from Delhi along with his teammate Kumar Sanket is tirelessly working for few years virtually and since the last one on the ground for the betterment of the district. In the same quest, he has been running a campaign for the last few months to improve the dilapidated condition of tourism spots, focusing on Kakolat Waterfall.
The said social organisation, Apna Nawada has led and undertaken several projects, ground-level campaigns, awareness programmes and workshops aiming at bringing to light and upholding the beauty of Kakolat Waterfalls. The social organisation has been also active in other several sectors in recent times, especially post covid lockdown and got itself heavily invested in the relief work.
Kakolat Waterfall is a natural beauty spot,  around 33 kilometres from the district headquarters. The fall is 160 feet long and has a deep reservoir at its base. It is surrounded by a deep forest around and hosts natural vegetation. The falls attract tourists from all over the state and also nearby Jharkhand. The place in recent time is getting increasingly popular as a picnic spot. Due to its natural beauty, it is also known as ‘Kashmir of Bihar’.
The falls also has mythological importance as it is mentioned in the tale of Mahabharat. It is said that the place was visited by the Pandavas when they were spending their time in exile. The falls also see various fairs at different times of the year where there are large crowds. In 2018, the incumbent Cheif Minister and Bihar Government announced several beautification projects for Kakolat which is yet to see the light of the day.
In the same effort, Apna Nawada has made certain demands for the beautification of this tourist spot. The demands include an increase in the expenditure on promotional and maintenance activities. It has also requested a separate tourism campaign for the Kakolat falls and has also offered its help in the same.
Apna Nawada has also requested decontamination campaigns and cleanliness drives around the waterfall. Suman Shekhar, the founder of the organisation says “This needs to be a collective and collaborative effort. Everyone, who is part of this district and this family needs to contribute to developing the tourist spots we already have to help ourselves. In the times when economic condition is worsening, this can also help boost the economy of the district.”
Sanket Kumar, another team member said “We have also requested the administration to encourages other social organisation and community workers to coordinate with each other and form collaborative campaigns, programmes and workshops aimed at raising community-level awareness about everyone’s duties regarding the preservation and promotion of the Kakolat Waterfall.”
Rajiv Kumar, a local of the city seemed to be optimistic about this campaign. He added “It is good that youngsters who went to premium universities are returning back and doing something for the community. The whole campaign around Kakolat is gaining prominence day by day and I do not think the day is far where Bihar starts being represented by the waterfall.”