The Bridesmaids Are All Ready 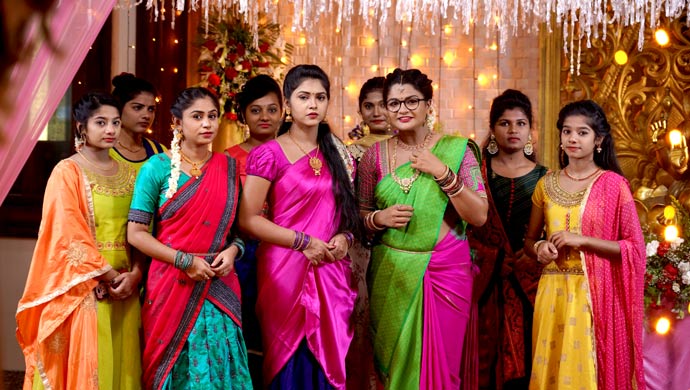 With much anticipation about the DNA test that Tara had demanded from Kamali and Chandru, aren’t we glad that the truth surfaced? Slowly but steadily! While Gauri has yet to enter the whole scenario and claim what is rightfully hers (which is quite unlikely, given the threat against her daughter), Chandru, Annapoorna, Rishi and Ningi were all smiles when the good news was given by Tara herself. Today, however, we are going to show you some super exciting pictures of a future episode from the show, which clearly shows that Kamali is now engaged to Rishi! When they will get married is still unsure but I can guarantee that their Nischithaartha pics will delight you to the core.

Starting with this bridesmaids picture, which is so cute. Kamali’s bestie and other friends are all gathered to show their love and support to the to-be-bride.

Kamali Joins In On The Fun 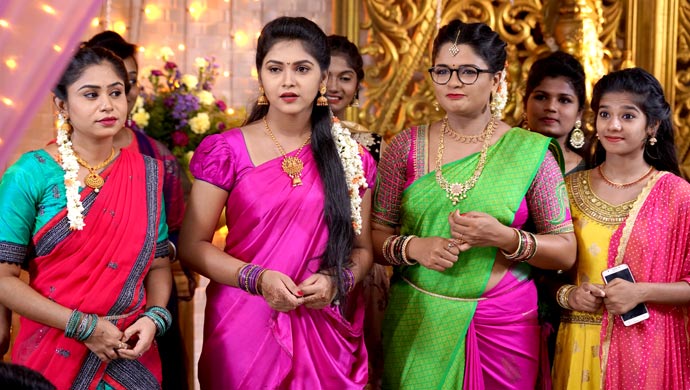 Her slight smile is enough to say that something is making Kamali blush. If you don’t believe me look at Ningi giggling next to her.

Something Is Worrying Kamali 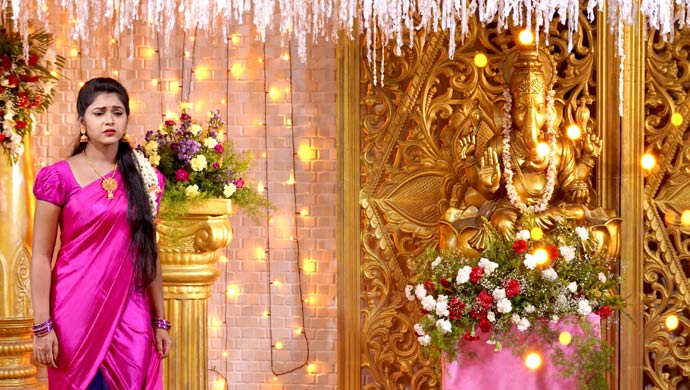 Is it the fact that her mother wasn’t able to make it to the engagement? Or is it some problem with Anika? Let’s keep our fingers crossed that everything goes well. 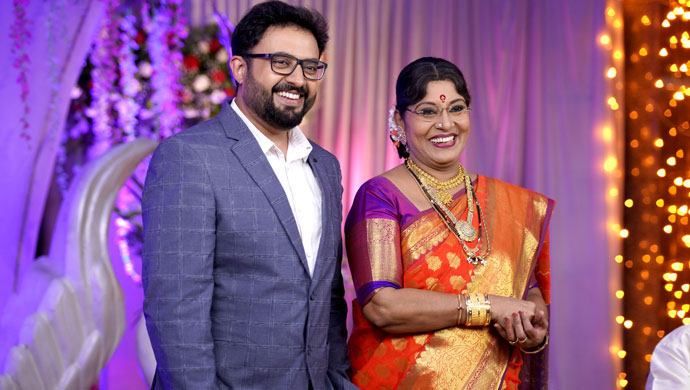 Chandrakant and Annapoorna are like the ideal Thayi-Maga jodi because they both are equally kind to everyone around them, but know when to retaliate too.

Three Generations In One Picture 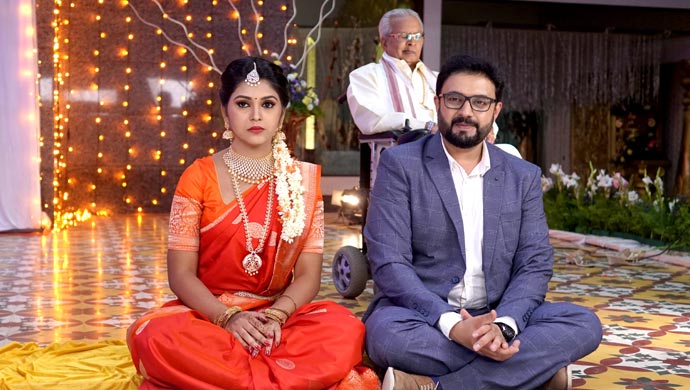 Even though Kamali doesn’t know it yet, what you see in the picture is three generations of pure Mahajan bloodline. This is what I call a #pictureperfect moment. 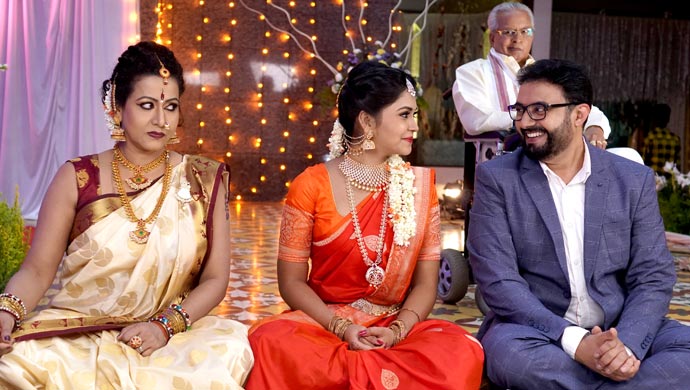 While her grandfather is watching them, Kamali shares a happy moment with her daddy dearest. However, look at the jealousy on Urmila’s face as she stares at her husband and the unwanted granddaughter of the Mahajan house. 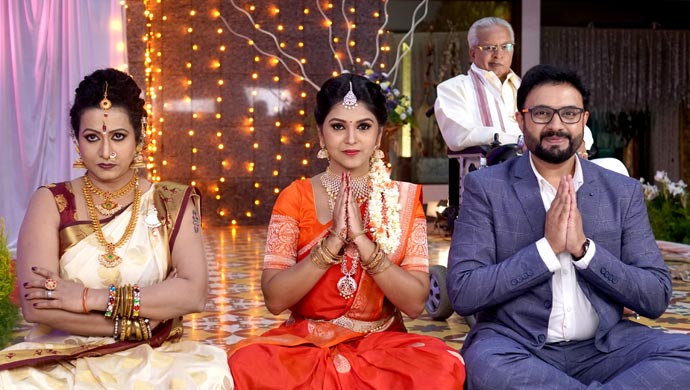 An annoyed Urmila poses for a photo with her onscreen emotions while Chandru and Kamali let out a lovely smile with their hands folded in a humble namaste. Like father like daughter don’t you think?

Urmila Has No Choice 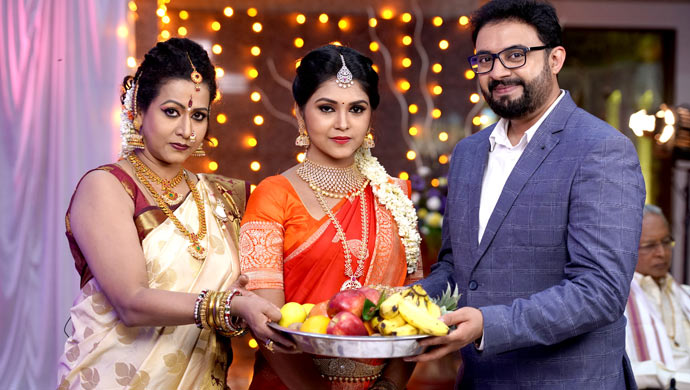 Yes! Seems like to save the Mahajan household name, Urmila has to step up and fill Kamali’s mother’s position. Chandru and Kamali, on the other hand, seem happy regardless.

Can Anyone Hear Wedding Bells In The Future? 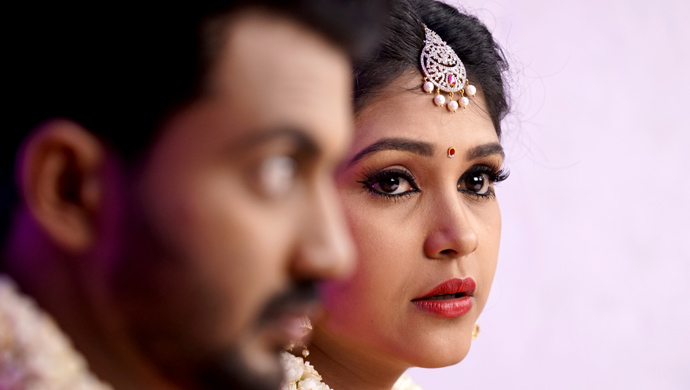 A beautifully captured candid still of the lead duo Niranjan and Amulya aka Rishi and Kamali. The surprised look on Kamali’s face adds an element of anxiety too. Don’t you think?

The Garlands Look Lovely On The Couple 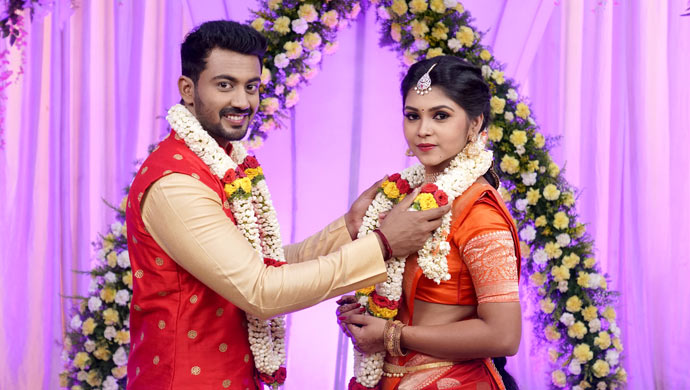 Rishi and Kamali smile for a pose while exchanging garlands. Since both of them are smiling it looks like things are going really well. 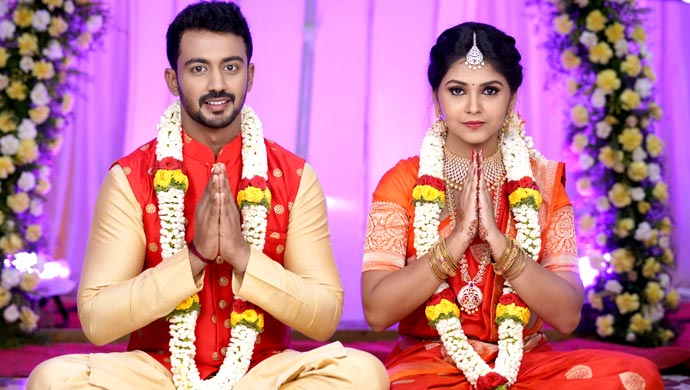 Sitting with legs folded and joining their hands in a namaste with a smile are the two lovebirds Rishi and Kamali. Did you notice their attire’s are almost colour-coordinated?

Kamali’s Heart Is Only Made For Rishi 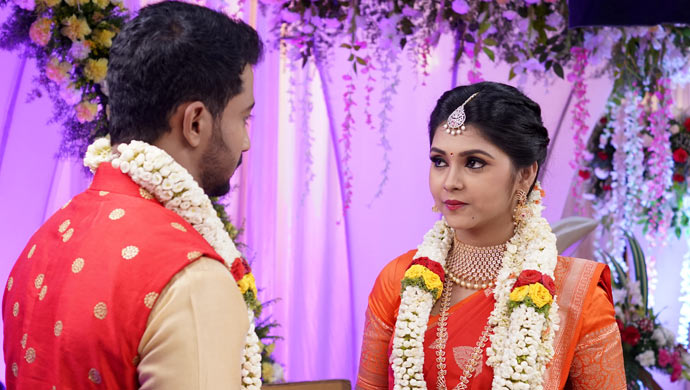 With all the love in her eyes, Kamali looks fondly at her to-be-husband. Something has always bothered me though, do you think she will always call him Rishi Sir? 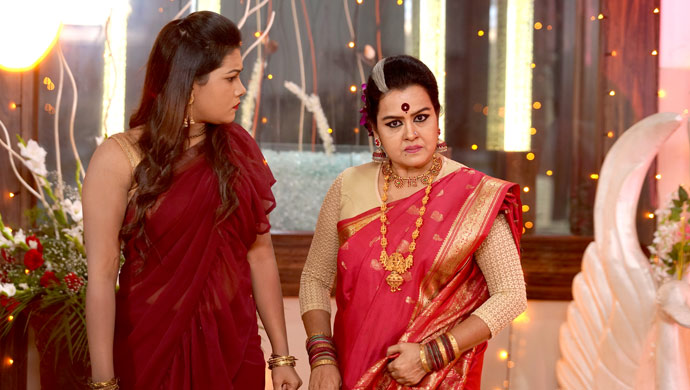 Disappointed in her grandmother for failing to help her many times now, Anika has started taking matters into her own hand. Still, Kamini doesn’t lose hope. In this picture though she looks plan-ready! 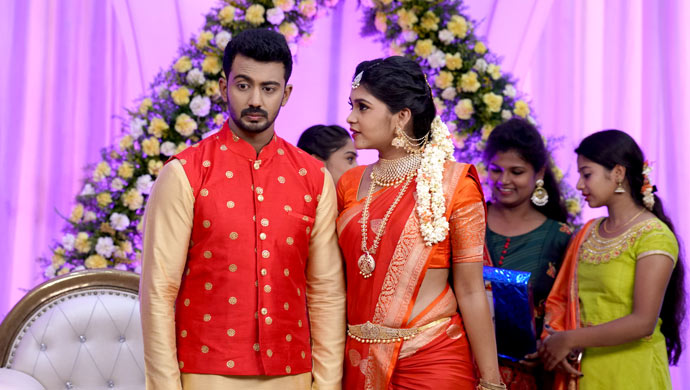 Maybe after still not telling him about her feelings, Kamali found the time to tell him at the nischithaartha about her love for him, just after this image was taken? 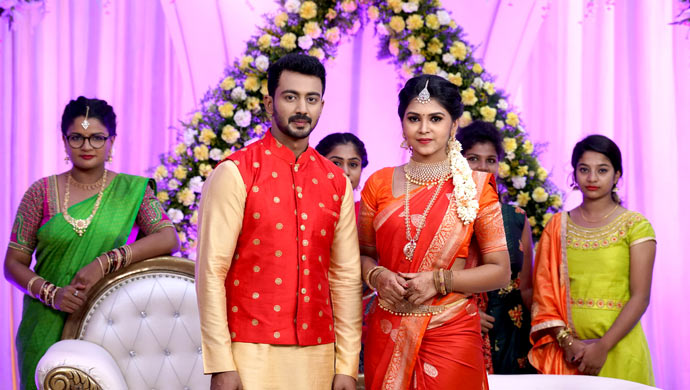 In my opinion, there can be no better couple than Rishi and Kamali, do you want to know why? Because both of them are basically good human beings and always complement each other in a dire situation. Plus, both of them care a great deal about the other, something very important in a relationship. 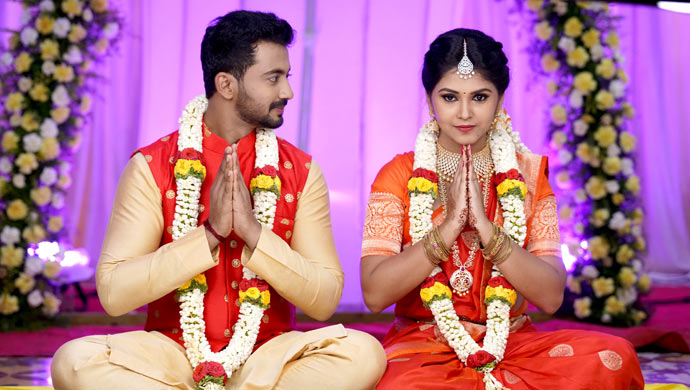 From the moment he set eyes on her, Rishi was irrevocably in love with Kamali. While she realised it later, but as they say, ‘All’s well that ends well’.

Annapoorna In A Candid Shot 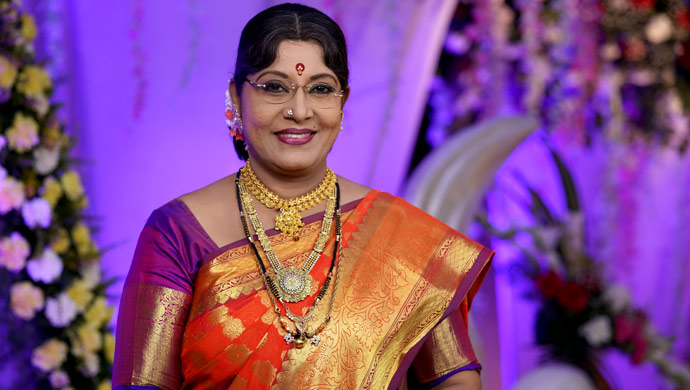 The veteran actress Padmavasanthi has done an exceptional job as Annapoorna Mahajan and continues to do so. Just look at her evergreen beauty shining brightly even after all these years! #touchwood

What Just Happened in this episode of Kamali? 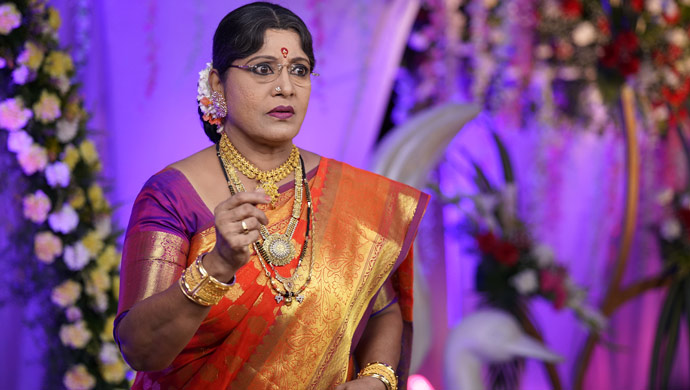 Let’s sincerely hope this expression of Annapoorna is not because of Anika, or her mom, or her ammamma. Could it be possible that Annapoorna found out about Kamali’s real bloodline? Let’s stay tuned to find out. 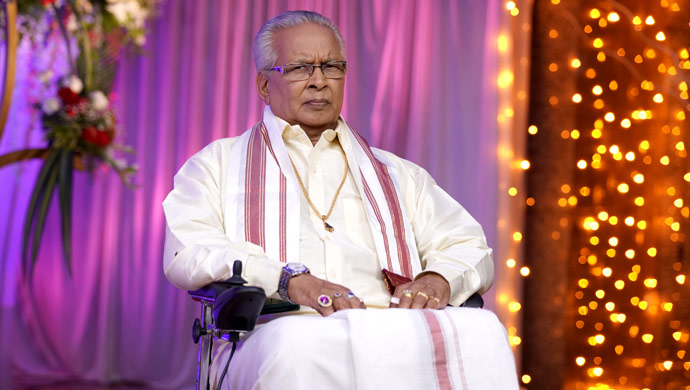 Yes! Because he is the only one who knows the real truth apart from Gauri. So we can’t wait for him to recover so that he can put an end to Kamini’s reign once and for all. 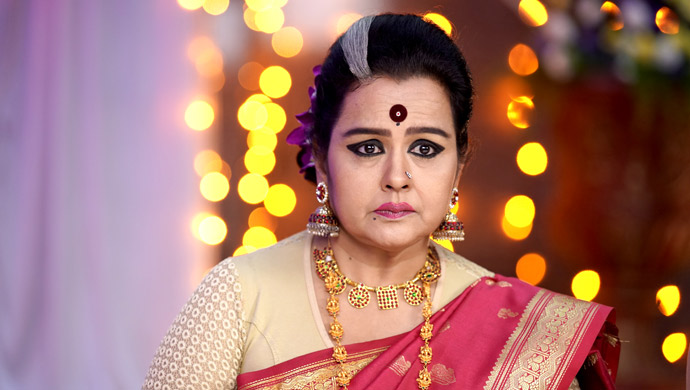 Although she looks paavam, don’t go by Kamini’s innocent looks because she will have at least 20 plans going on in her head simultaneously. 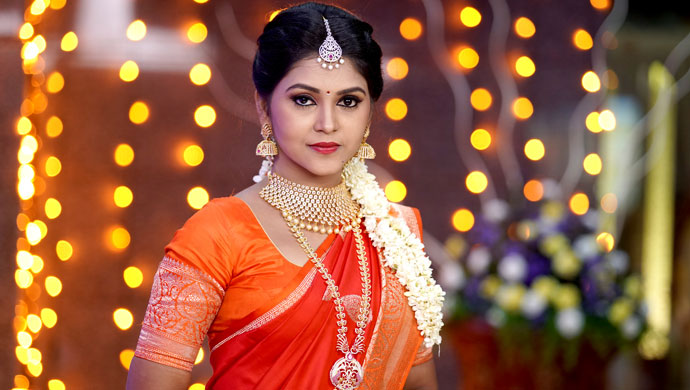 Looking stunning in this orange and reddish-orange combination, Kamali flaunts a slight smile and poses perfectly for the camera. Her necklace and accessories look like they were designed to be adorned by her.

Anika Will Never Give Up Trying To Please Rishi 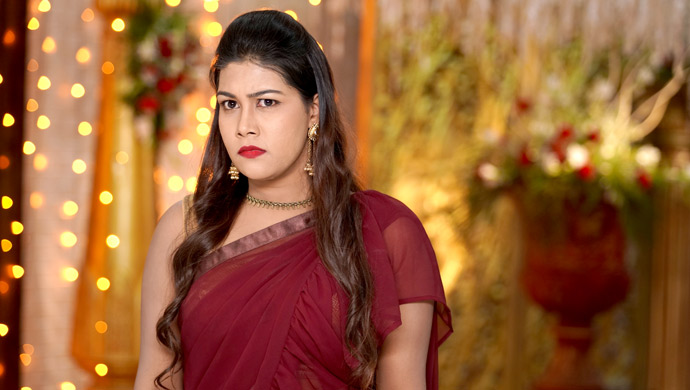 Something is going on in Anika’s mind about teaching Kamali a lesson. No matter how hard Kamali tries, Anika will never accept her as an older sister, so let’s wait and watch to see what plan Anika has hatched. 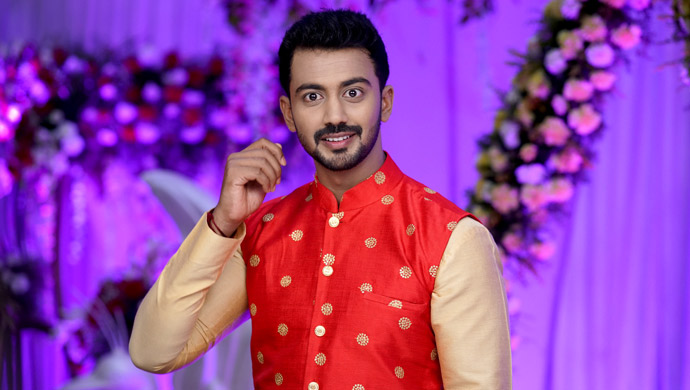 Only when Kamali flirts or responds to his romantic comments does Rishi’s face become like this. To know what Kamali said, stay tuned.

We Will Leave You With A Smiling Picture of Rishi-Kamali 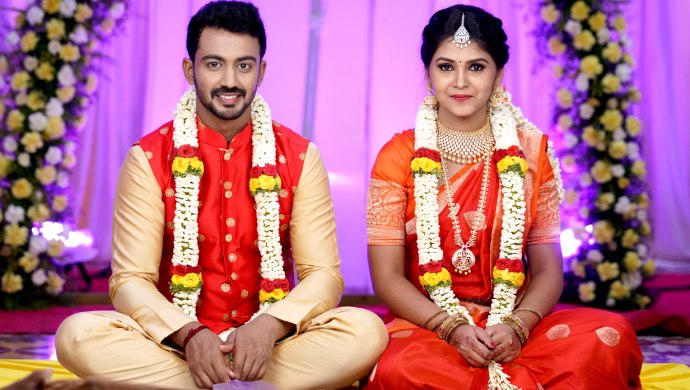 Yes! Life is great when your favourite onscreen duo is about to get engaged. When? How? All these questions will be answered in the near future, so make sure you stay tuned.

Wish the couple your best wishes in the comments box given below.

All Puneeth Rajkumar fans can watch Natasaarvabhowma on ZEE5, for more entertainment.