Do You Know Vibhuti Is Trying To Find A New Job In Bhabi Ji Ghar Par Hai? All New Twists In The Show

Do you know Anita is turning religious Sadhvi in the show Bhabi Ji Ghar Par Hai? Take a look to know more about such interesting twists in the show.

Bhabi Ji Ghar Par Hai certainly engages its audience with its intriguing storyline and funny characters. The show is based on the lives of the two couples who are neighbours and live like a family with each other. The show has several amazing storylines like how Angoori bhabhi starts her Youtube channel or how Anita and Vibhuti go for a vacation. Here is a glimpse at the upcoming twists and turns in the storyline of Bhabi Ji Ghar Par Hai.

In the upcoming episode of BGPH, the audience would see Anita’s new look as she turns religious. She will be seen praying and also giving Vibhuti a lecture about good values. Interestingly, the audience will finally see Vibhuti searching for a new job but as we all know, nothing comes easy to Vibhuti. Vibhuti is going to find Charitrvaan, a good-charactered person as his boss, though Vibhuti gets successful in fooling him, his boss keeps a condition that he would only hire Vibhuti after he proves that he is good in character.

Vibhuti gets elated after he gets to know that his boss is impressed. Angoori calls Amma Ji and tells her that she knows Amma Ji is eagerly waiting to see her grandchild. Angoori also tells her that she has taken a decision to give Amma Ji a grandchild. Angoori tells Amma Ji to ask the pandit for a solution. Vibhuti goes to Angoori to tell her that he has been shortlisted as one of the three candidates in a big company. Vibhuti is sitting and having his cup of tea when Tiwari’s new client asks about Tiwari’s background.  Vibhuti convinces the client that Tiwari is not a good person and he shouldn’t do business with him. Tiwari comes there and convinces the client but he runs away.

In the next episode, the audience would see Vibhuti taking his boss to Tiwari’s house. His boss meets Angoori while Tiwari sees them secretly. Angoori talks ill about Vibhuti to his boss and tells that he is good for nothing. Will Vibhuti get his dream job or Tiwari’s plan to make his boss run away get successful? 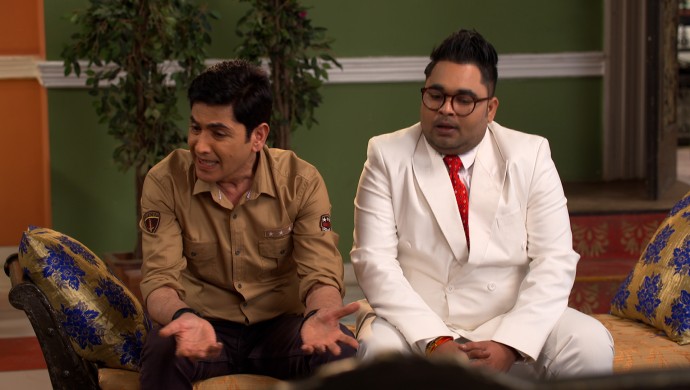