Did Travis Barker And Machine Gun Kelly Decide To Keep Their Outfits Coordinated For Their Big Day? Fans Make A Quick Notice

Recently Machine Gun Kelly and Megan Fox shook the internet with their dreamy proposal video. But fans were too quick to notice something else and the observation is hillarious

In the last few months, Hollywood has seen some incredible love stories progress to the next level. Many budding romances have recently gained popularity, generating intrigue and excitement among followers. Megan Fox recently grabbed the internet by storm when she released a video of her proposal on her Instagram account.

On social media, many were swift to tease the duo’s coordinating moments. “Can someone check whether Pete Davidson can be seen looking for a striped shirt?” says a netizen after Kourtney and Megan Fox’s engagement referring to the “SNL” star’s quick affair with Kourtney’s sister, Kim. 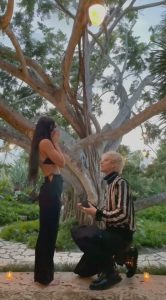 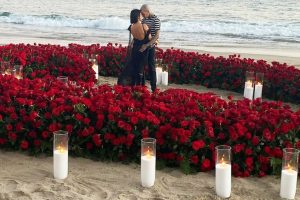 Another joked, “Do you believe your eyes that Travis and MGK coordinated outfits for this moment?” while a third added, “Travis Barker opted for horizontal lines so Machine Gun Kelly was saddled with the verticals!” On their great occasions, MGK and Barker’s to-be-wives donned likely appearances. Fox, 35, sported a black bra and skirt combo with thread ties, while Kourtney opted for a likewise backless Valentino dress with ribbons at the shoulder.

While it’s unknown if the two musicians intended to propose at the same time, they’ve been close friends and musical colleagues for a long time. And, thanks to their individual “baby dads,” Fox and Kardashian have now become great friends, going on double dates and starring in a social media breaking Skims commercial together.

(Also Read: Kourtney Kardashian And Travis Barker Gets Along For A Family Day; The Star Drops Pre-Christmas Pictures)

MGK and the “Jennifer’s Body” star confirmed their engagement on January 13th, and the Poosh creator was first to congratulate her. At the very least, their diamond rings are completely different, with Kardashian’s being a big oval-cut sparkler and Fox’s being a significant two-stone type.