Did Shamita Shetty And Raqesh Bapat Just Confirm Their Relationship? Duo Gets Spotted At A Dinner Date

Shamita Shetty and Raqesh Bapat head out for a dinner date for the first time after the conclusion of their digital reality show. But wait, did they just confirm their relationship? Their latest Insta story suggests so

Shamita Shetty and Raqesh Bapat are the new love birds of the town. As the weekend has begun the duo decided to kick it with some good food and headed out for a dinner date. The paps quickly snapped them together, and the two looked absolutely comfortable in each other’s company.

Raqesh was seen wearing a slim fit black shirt and ripped jeans paired with neutral shoes and kept his hair well. Shamita on the other hand was seen wearing a light pastel co-ord body fit set with small mirror beaded heels. Her make-up was all fresh and neutral and her hair was beautifully set. She was all smiles and the duo happily gave a moment to the paps. 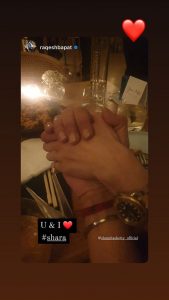 The duo was seen together in a digital reality show. Their fights, beautiful moments, and displaying their emotions towards each other made fans fall in love with this duo.

Kashmera Shah had also passed a comment saying that Raqesh is all set to be a henpecked husband again and this comment irked ex-wife Ridhi Dogra and she asked Keshmera not to pass loose comments. After the wrap-up of the digital show, Raqesh also recently addressed this comment and gave a simple reply which made a lot more sense as Raqesh is a much calmer and cooler person and doesn’t believe in shouting, yelling, and things as such to make his presence felt. He also loves treating his woman like a queen and there’s nothing wrong with this at all.

However, it was Raqesh Bapat and Shamita Shetty’s first outing outside the digital show and the duo looked absolutely adorable with each other. Shamita was asked recently about her relationship with Raqesh to which she shared that they’re just friends and didn’t share anything much more but things seem different and an official word is awaited eagerly. However, their actions seem completely different from friends.