The very gorgeous Mouni Roy graced the stage of Dance Deewane 3 and shared a few pictures from her visit on her social media handles. The actress with co-judge along with Madhuri Dixit and others

Television’s favourite Naagin, Mouni Roy is making it big in the world of Bollywood these days. Mouni has been a part of quite some popular films and has an interesting lineup of projects lined up too. Well, the actress recently visited the sets of the popular dance reality show Dance Deewane. Mouni was seen posing for pictures with judges Madhuri Dixit Nene, Tushar Kalia, and Dharmesh.

Mouni took to her Instagram handle to share a few glimpses from her shoot last night. The actress described her meeting with a fire emoji. Have a look at Mouni’s pictures here : 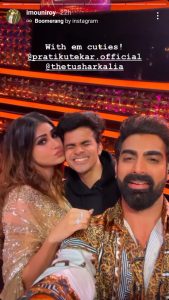 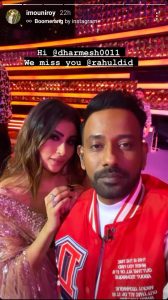 Well, Mouni had graced the stage of Dance Deewane along with singer Jubin Nautiyal for the promotions of their upcoming song. However, the name of their song has not been revealed yet.

While the actress looked extremely beautiful in a glittering Saree, Singer Jubin Nautiyal looked dapper in a suit. For the unversed, Mouni herself is a trained dancer and is often seen worshipping this art form. The actress has time and again portrayed her loge for dancing through her Instagram handle too.

Have a look at a few of Mouni’s dancing clips here :

The gorgeous Mouni Roy made her way into our hearts when she appeared in Ekta Kapoor’s supernatural fiction series Naagin. The actress continued to play the role of a Naagin for two seasons, however, she later decided to move to the big screen. Mouni has appeared in films like Gold opposite Akshay Kumar, Made in China opposite Raj Kumar Rao, Romeo Akbar Walter opposite John Abraham, London Confidential, and more. The actress will also be seen in Alia Bhatt and Ranbir Kapoor’s most awaited upcoming film ‘Brahmastra.’ Mouni has also appeared in several hit music videos too.

Well, how excited are you to watch Mouni Roy gracing the stage of Dance Deewane?