Cost Of Priyanka Chopra’s Mangalsutra Will Put A Burn In Your Pocket; Don’t Miss

Did you see the latest cover feature Priyanka Chopra? The lady is dolled up in the height of International fashion, haute couture and sporting an unmissable mangalsutra. Apparently, the 18carat yellow gold with black onyx inserts and diamonds mangalsutra that our lady sported was from Bulgari (or as the fashion gurus prefer it, Bvlgari), a product designed specifically for their Indian market. WOW!

Priyanka Chopra Jonas who is the global brand ambassador of Bulgari, spoke extensively in a press conference about the significance of the mangalsutra and lauded the piece calling it contemporary and cool, at the same time traditional and meaningful.

Mangalsutra at Bulgari can be found in the new collection of neckpieces, going by the name Bvlgari Bvlgari necklace, sold at the whooping price of Rs. 3,49,000/- 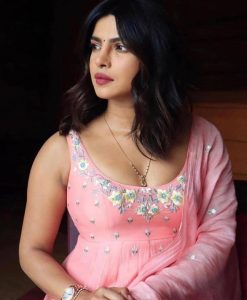 Priyanka has always been a traditionalist with a modern twist, she has always insisted on flaunting her traditional values with aplomb, be it with her grihapravesh pujas or her pujas she did at her New York restaurants, be it making her husband come down for Holi or even sporting a beautiful sari at her brother-in-laws’ wedding. So, it is hardly a surprise to hear that Priyanka has been trying to launch this mangalsutra along with Bulgari since the past 3 years. While it has taken some time, it sure has come at the right time with the world finally coming out of the pandemic with renewed enthusiasm.

While describing the mangalsutra that Priyanka Chopra launched, she said it is a great feeling to finally see this dream of hers come to fruition, “It (mangalsutra)’s so elegant and chic, designed for the modern Indian woman who takes charge of her own life. I’m so proud of this partnership.”

As we are proud of her for making sure India is always on the top of the game.

At work, this desi girl is unstoppable with her much-awaited project the untitled fourth Matrix movie which is a follow-up of 2003’s The Matrix Revolutions. Closer home, Priyanka will be pairing up with Alia Bhatt and Katrina Kaif for a road trip, directed by Farhan Akhtar called Jee Le Zara.