Bruce Lee Birth Anniversary: Looking Back At ‘Way of The Dragon’, And Why It’s The Most Underrated Movie Of This Martial Artist

On the birth anniversary of Bruce Lee, have a look at how his memorable film Way of The Dragon involved his contribution in all spheres of the making.

Bruce Lee is considered to be one of the most popular, influential, and legendary martial artists of all times. He was a Hongkong-American actor and a performer who gained global recognition due to his talent in many creative spheres. Even now, his legacy is remembered by everyone and he continues to be a prominent icon in today’s world. As a tribute to him on the occasion of his birth anniversary, here is a trip down memory lane which will remind you why his film Way of The Dragon is the most Bruce Lee movie ever.

Watch The Way of the Dragon here:

Way of The Dragon is a comedy-action film which was released in the year 1972. It was not only directed, written, and co-produced by Bruce lee but he also starred in the film as a lead. In the movie, Lee plays the role of Tang Lung who visits his relatives in Italy and witnesses them being harassed by brutal gangsters. Tang steps up to protect his relatives and saves their restaurant.

Even though his other film Enter The Dragon is considered to be more popular, we think that Way of The Dragon really has way more essence of Bruce Lee. From direction and scriptwriting to casting, the film the presence of Bruce in each and every part. It is a representation of solely Bruce’s ideas, thoughts, and feelings as compared to his other films where other people would have been deeply involved too. 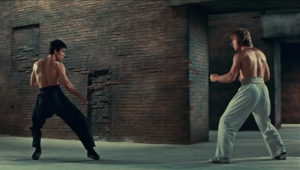 This film allowed Bruce to explore his creative talent and experiment with his ideas however he wanted. He added elements of humor, quirk, and fun into the film which is something he was not generally known for.  He was so dedicated to his film that according to IMDB, he “dubbed almost all of the English speaking characters in this film including one line for the boss”.

IMDB  also claims that “he also played percussion on the music for the soundtrack” and reportedly turned down a role in Slaughter in San Francisco so that he could give all of his focus to this project. His dedication and involvement with this film just prove that Way of The Dragon has got to be the most Bruce Lee film ever. Some of his other works include Fist of Fury, Circle of Iron, Game of Death, and more.