Drama is something Nikki Tamboli ensures to get along with her be it in her outfits or her stint during Bigg Boss. This time for her appearance in the house hosted by Karan Johar, Nikki went all out in her magenta pink outfit which has raised eyebrows. Nikki is seen wearing a two-piece halter neck top which has a slit in between with silver monochrome bands near her torso and paired it up avec one side long ruffled skirt with beige pencil heels. Her makeup looked absolutely stunning and her hair was well kept in long curls. While we loved the outfit, the balance was slightly offbeat and could’ve been better. Well, it was good to see the actress bid adieu to her love for bodycon dresses and try something new but it was quite risky, quirky, and sexy at the same time.

Nikki was accompanied by Bigg Boss season 14 winner Rubina Dilaik and the duo played games with the contestants, had lots of laughter with a pinch of drama and also revealed their favorite contestants in the season. The episode had everything we need. 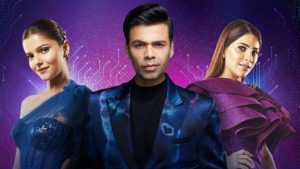 Nikki Tamboli was also recently spotted at late Sidharth Shukla’s funeral along with Rubina Dilaik, Shehnaaz Gill, Asim Riaz, Karanvir Bohra, and many other well-known faces of the television industry who paid their homage.

Her journey in Bigg Boss 14 has been quite an interesting one and she knew exactly how to turn the lens towards her giving us all the extra drama we looked out for. The actress is also known for her great work in the south movie Kanchana 3 and also participated in the stunt-based reality show Khatron ke Khiladi season 11 where she fairly performed well. Drama and Nikki do definitely hand in hand let’s see what’s next on the plate.