We all know that within each season of audiences and fans favorite reality show, Bigg Boss 15 has always been associated with physically aggressive fights in between contestants, using bad derogatory expletives against each other, taking stands for what is morally correct, and using physical strength along with playing the mind games for going ahead in the game, we also know that the mindblowing and unexpected twists introduced by makers for keeping audiences and fans glued to their television screens is commendable as it makes the netizens and fans more curious and captivated to know what is going to happen in next further episodes.

We know that the makers have completely changed the game by introducing their selected fiery wildcard entries in the form of Devoleena Bhattacharjee, Rashami Desai, Bigg Boss Marathi fame Abhijit Bichukale along with the renowned personality and entertainment queen Rakhi Sawant as well.

Wherein no one had any idea and inkling of same since Rakhi’s entry was being kept under wraps by the makers but now they have finally revealed this big surprising move which has made the celebrities, fans, netizens, and audiences also excited and thrilled again for watching the show again. 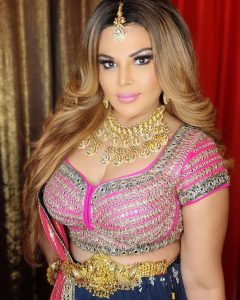 We all know how Bigg Boss 15 has been struggling a lot ever since its inception to get TRPs which has resulted in the popular and controversial reality show not coming in the top ten shows on the rating charts but ever since the recent bottom-six eliminations twist along with the entries of the four renowned celebs as the wildcard contestants we all are going to see the foursome spike up the over the top drama with their presence and add in a masala tadka of entertainment and increase the already simmering fireworks, tensions and strains within the house as well.

Now that the new promo featuring Rakhi Sawant’s entry in the house has been dropped by the makers, it has made netizens and fans more thrilled and excited to again start watching the episodes of Bigg Boss 15 and everyone knows that in last season ever since Rakhi’s entry things went to an entertaining level which reflected in the ratings and the show was rocking on the TRP charts and now Rakhi is already setting her game plan to create a huge crack and apparently also cause a breakup in between the newest heads over heels in love couple in the Bigg Boss 15 house, Tejasswi Prakash and Karan Kundrra who are also shipped by their fans as TejRan on social media each day since they keep on redefining the relationship and couple goals and their love story is being loved by fans and audiences as well.