In the recent episode of the most loved and awaited Weekend Ka Vaar special on the reality show Bigg Boss 15, we all saw that the lovebirds of the house, Tejasswi Prakash and Karan Kundrra are having yet another verbal spat with each other

We all are seeing that with each episode of the controversial reality show, the challenges and struggles faced daily by the contestants to survive inside the house are increasing manifolds and so is the madness and chaos wherein there are constantly changing equations, emotional upheavals, friendships being formed, old friendships being broken and new love angles are also seen sprouting out in the entire week’s episodes with special reference to the infamous love triangle between Pratik – Devoleena and Abhijit and not to forget, Umar and Rashami’s bonding with each other that is seen getting stronger and their love for each other is also clearly visible but they haven’t confessed it officially yet.

We also saw another filthy argument between the good friends Abhijit and Devoleena in which both of them were seen giving bad words to each other and also were set to push each other physically but had been stopped at the last moment by the housemates because she was releasing her anger as the ticket to finale task got radh by Bigg Boss again.

This increasing fight, struggle, and madness is growing more violent in the house with every passing day as the finale is only two weeks away and so far no contestant has been able to win the ticket to finale for securing their spots in the top five of the show is also badly affecting and taking a toll on the relationship between the recently official real-life couple Karan Kundrra and his girlfriend Tejasswi Prakash.

We all have been seeing how this much loved and most popular ‘IT’ couple TejRan have been indulging themselves in strong and bitter fights with each other over the past few weeks and in the recent episode as well, towards the end, we all saw that both Tejaswwi and Karan were at loggerheads with each other yet again.

It all erupted from the moment Tejasswi called beau Karan a ‘liar’ as after Salman had shouted and insulted Shamita, she was seen crying a lot in the bathroom and Karan was consoling her like a true and real good friend which irked his girlfriend Tejasswi who got upset seeing this since it didn’t settle down well with her and when Karan went behind her to explain, Tejasswi didn’t listen to him and called Karan a liar. 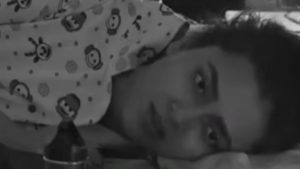 Then later at night, when she tries talking to him he doesn’t respond to her at all and after she keeps on insisting him to speak, that moment Karan says how he is feeling drained of this emotional drama each day and wants to be happy and sing, dance. He is seen sleeping on a separate bed away from her and then she gets up and funnily kicks him twice by going on his bed and sitting there.