Karan Kundrra was seen getting teary-eyed after Rakhi Sawant and her husband Ritesh went ahead to call his relationship with Tejasswi Prakash ‘Fake.’ During his come back to them, Karan spills the beans on his marriage plans with Teja. Read on

In the episode of weekend ka vaar today, the VIPs aka the new wild card contestants had been given a task by host Salman Khan where they were asked to pick a pluck card and choose three contestants who had the quality written on the pluck card on the rank of 1, 2 and 3. It was during this task that Rakhi Sawant’s husband Ritesh picked the pluck card of “100 percent fake” and decided to call in Karan Kundrra, Tejasswi Prakash and Umar Riaz. He gave Karan the number 1 rank, Tejasswi Prakash the number 2 rank and Umar Riaz the number 3 rank. 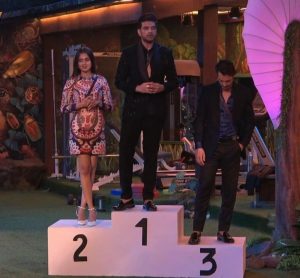 When Salman Khan asked the actor to explain his decision, he called Tejasswi and Karan’s relationship 100 percent fake and went ahead to state that the two are just faking it for the game. Not just Ritesh, his wife Rakhi Sawant too went ahead to call the two fake. This did not go well with Karan Kundrra and the actor was seen breaking down in front of Shamita Shetty, Rakhi Sawant, and Rashami Desai. Post which, Karan was also seen revealing that his astrologer has told him that he will get married in March 2022.

Rashami and Shamita Shetty were shocked by this revelation by Karan Kundrra and went ahead to ask him if it is true. Rakhi Sawant, who was present with Karan, Shamita, and Rashami was seen stating that Tejasswi is too young to get married. Listening to this, Karan was seen stating that things can change overnight.

Well, what is your take on this reaction of Karan Kundrra?