During the latest Bigg Boss 15 Weekend Ka Vaar episode, Tejasswi Prakash was finally seen admitting her feelings for Karan Kundrra and went ahead to state that she is in love with the actor now

Tejasswi Prakash and Karan Kundrra’s relationship has been the talk of the town off late. From people calling the duo ‘Fake’ to people stating that the two have lost the plot, Tejasswi and Karan have been on the receving end for quite some time now. Well, during the weekend ka vaar episode today, the VIPs aka the new wild card contestants, Rashami Desai, Devoleena Bhattacharjee, Rakhi Sawant and Ritesh were given a task due to which the three of them had to give rankings between 1 2 and 3 to contestants. During the task, Rakhi Sawant’s husband, Ritesh was seen calling Tejasswi and Karan’s relationship fake and went ahead to state that the two are together only for the game.

He also went ahead to state that the two have been kissing each other only to show off to the audience and do not mean anything.Well, this did not go well with both Tejasswi and Karan who were seen slamming him for this remark. After Salman Khan left during the break, Tejasswi Prakash and Rakhi Sawant were seen getting into a conversation where in Rakhu constantly allegesd Tejasswi of having a fake relationship with Karan Kundrra. The actress also went ahead to state that she knows Karan and his history too and went ahead to ask the actress if she really feels for Karan. Tejasswi Prakash was seen getting into tears upon hearing these allegations of Rakhi Sawant. Post which, Tejasswi went ahead to tell Rakhi that she really loves Karan. Not just this, The actress also went ahead to tell Rakhi that it does not matter what she tells her about Karan and that she really trusts him. 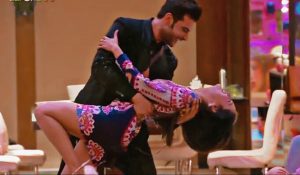 What is your take on this confession of Tejasswi Prakash?