The latest captaincy task inside the Bigg Boss 15 house leads to a major showdown between Tejasswi Prakash and Shamita Shetty. Read on to know what made Tejasswi call Shamita insecure

The seeds of rivalry sown in the previous episodes have started to reap in the Bigg Boss 15 house. Tensions between Tejasswi Prakash and Shamita Shetty have been building up, and now this cold war has finally escalated into a hardcore battle! Tejasswi has been aiming to become the house captain for a while now, but Shamita’s actions have cast a shadow of doubt over her goal. In the latest episode of Bigg Boss 15, we saw Tesjasswi and Shamita fighting against each other captaincy.

In the latest episode, Shamita was seen voting against Tejasswi, significantly eliminating her chances of winning the position of captain. This infuriates Tejasswi, who confronted her demanding an explanation from Shamita for her behavior. The latter replied that she wants the captaincy for herself. “I have played my game my way! I have a problem with you being the captain of the house,” Shamita states. Tejasswi retorts saying, “This looks like insecurity!”

Tejasswi was also seen trying to confide in Karan about how twisted this game is becoming, but Karan pointed out the flaw in her outlook, leading to a fight between the two. She snapped him saying, “Kisi ko kisi ki zarurat nahi hai show mein aage badhne ki.” Karan responded saying, “Very unfair. This is your tendency. Jab bhi terko gussa aata hai, tu ulta-seedha bohot kuch soch leti hai!” Tejasswi gets upset with him and coldly tells him that it is her problem. She further points out that she doesn’t need anybody’s help and walks away. Their latest tiff makes us wonder if the romance between the two is coming to an end? 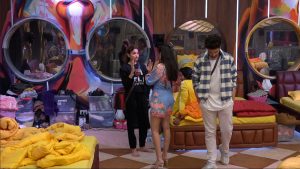 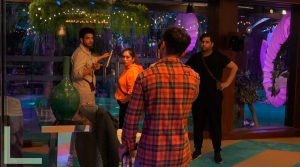 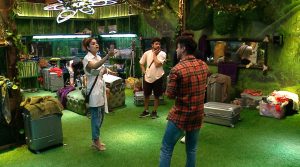 On the other hand, Pratik picks a fight with Umar and Ieshaan individually ahead of the captaincy task. While he targets Umar during his cooking duties, he starts sledding Ieshaan before the task begins. The three of them eventually get down to pushing each other to take part in this captaincy task before others. Meanwhile, Jay and Pratik set their rivalry aside and start targeting Afsana as the task continues. Afsana feels extremely cornered and starts yelling at them to back off and not touch her. Hearing this, Karan immediately jumps to her defense and reprimands Jay and Pratik for misbehaving with a woman in the heat of the moment. “Screw the task! Ek ladki khadi hoke bolti hai ‘Don’t touch me’ toh aap usko counter nahi kar sakte!” However, Jay and Pratik don’t spare Karan either, pointing out that he has misinterpreted this issue. While Jay asks, “What example is he giving?” Pratik declares that he does not consider Karan his mentor anymore. “Bohot ghatiya baat boli hai,” Pratik yells. Karan feels deeply hurt by this fight and breaks down. Shamita consoles him. While wiping his tears, he says, “I felt bad! I have sisters. She’s like a sister to me.”

Will the housemates be able to sort their issues, or will their fights escalate? Well, only time will tell. For more such updates on Bigg Boss 15, keep reading this space!