In the upcoming episode promo of the controversial reality show Bigg Boss 15, audiences and fans are going to see how Abhijit Bichukale is in a war of words with Pratik Sehajpal which intensifies with each minute

From the past few episodes, we have been seeing a confused relationship between Abhijit Bichukale and Devoleena Bhattacharjee who claim to be good friends but even had the infamous kissing feud and controversy which ruptured their relationship a lot, and in the recent episode as well, Devoleena confessed how Abhijit had caught her smoking in the den and made a loose comment on her by calling her a chameli which irked Pratik who then tried calmly explaining Abhijit to put a limit on his words as he is losing the plot yet again.

Audiences are going to yet again see the violent side of contestant Abhijit Bichukale who has been growing a maddening obsession with Devoleena Bhattacharjee for the past few days now and we all know how Pratik tries to be a mediator in between Abhijit and Devoleena who share very complicated friendship and bonding and by now everyone knows that Pratik and Devoleena have been grown closer to each other ever since Devoleena’s confession that she likes Pratik a lot and that his touch is comfortable to her but she does not like Abhijit’s touch.

In the recent promo of the episode released by makers on the channel, Abhijit Bichukale is intentionally seen pushing the wrong buttons of Pratik Sehajpal by telling this dialogue which is, ‘Yeh aadmi hai wo darinda’ and on this losing his anger Pratik says that he will seriously punch Abhijit hard on his face and then we all see how Abhijit removes his mike and swinging it in the air, he throws Pratik an open challenge to hit him physically and the dialogue he says to Pratik here is, ‘Agar ek baap ki aulaad hai toh maar mujhe’. 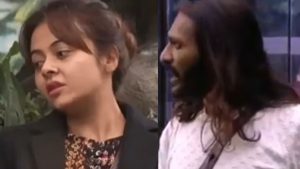 Then this erupts a huge fight between Abhijit and Devoleena who goes towards Abhijit and asks him that who is one man’s son and when Abhijit tried justifying himself she didn’t listen to him at all and then getting irritated he called her ‘beech ki bandariya’ and on this Devoleena loses her anger and replied that people should beat him up badly and he might be a beech ka bandar.