Bigg Boss 15: Neha Bhasin Spills The Beans About This Contestant; Shares, ‘I Have Lost My Faith In Nishant Forever’

After her eviction from Bigg Boss 15, in a recent interactive Q N A fans session on Instagram, Neha Bhasin spills the beans about her current emotional state as she witnessed first-hand betrayal from Nishant Bhat

Recently we also witnessed the shocking triple eviction of Jay Bhanushali, Neha Bhasin, and Vishal Kotian from the Bigg Boss house and also witnessed how the makers got this mega twist in the show by doing multiple evictions and bringing in the new fiery four wildcard contestants in form of Rakhi Sawant, her husband Ritesh, Rashami Desai and Devoleena Bhattacharjee which has made the show finally more interesting and exciting enough which is evident with the way that audiences and fans have yet again started showering their love and applauding this new move brought in by the makers and social media has been on fire ever since Rakhi, Rashami, Devoleena, and Rakhi’s husband Ritesh have entered in the house as the real foursome of VIP members who are going to make the lives of contestants more interesting and challenging along with being very tough with the celebrity contestants by getting tasks and work done in the house.

After her eviction, we saw how Neha Bhasin conducted a new Q n A fans session on Instagram, and during the same when a fan asked her about what is her take and whether Nishant is using Pratik for playing his game and going ahead in same since audiences are feeling the same now, on this Neha Bhasin shares that she hopes it is not true but it is fact that she has lost faith in Nishant forever and she is not trying to spread any hate but is done being foolish as there’s so much of one’s vulnerability that a person can expose time and again that too on national television and it was her love for the digital show contestants that stopped her from feeling differently than staying loyal which is her first nature and also expressed that she often felt very alone and sad and she is not someone that has been born for survival and in the end, she said that she has forgiven, forgotten and also moved on in life and said that may God bless all her fans always. 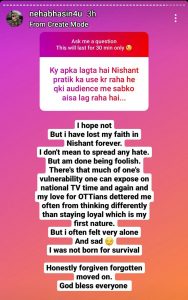 When a fan asked her about her take on witnessing Shamita crying after her eviction from the house on this she added that she always misses her but this love is going to be there for a lifetime and she knows that Shamita would be alright. 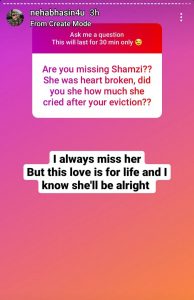 When another fan also quipped that they miss her and Pratik’s friendship and bonding, she exclaimed that now is the time for both of them to move on and added a good night to her fans along with adding how much she loves them all. 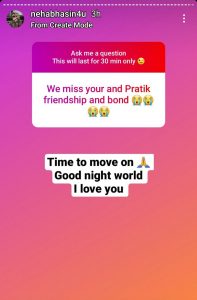 (Also Read: Bigg Boss 15: After Her Eviction, Neha Bhasin Shared A Heartfelt Video With Her Fans; Thanked Them For Their Love And Support – WATCH)