Bigg Boss 15: Miesha Iyer Slams Tejasswi Prakash For Bringing Up Her Name As She Accused Pratik Sehajpal Of Inappropriately Touching Girls During The Task

Miesha Iyer, who was evicted from the Bigg Boss 15 house some time back took to her Instagram handle to bash Tejasswi Prakash on this statement and for also taking her name during the arguement. Miesha went on to state that she has been receiving a lot of messages since last night and that she wants to clear her stand. Clearing herself, Miesha was seen stating that the incident wasn’t the way it is being projected by the actress. Miesha went ahead to state that she would have brought it up, if it was uncomfortable for her and that such a big issue wouldn’t have been ignored on the Weekend Ka Vaar episode by host Salman Khan. Further she slammed Tejasswi Prakash stating that Tejasswi is using her as an example for her own convenience. 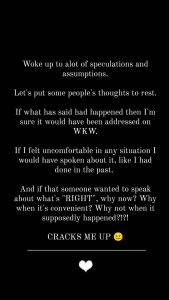 Well, Miesha and Tejasswi were good friends on the show. However, when Tejasswi Prakash nominated the actress, Miesha lost her calm and was on loggerheads with the actress throughout her stint in the show. Miesha had earlier too questiones Tejasswi and Karan’s romance stating that her romance with boyfriend Ieshaan Sehgaal was termed Vulgar but Tejasswi and Karan’s romance is being called cute and that this is pure hypocrisy.

Well, what is your take on this statement passed by Miesha Iyer? Let us know in the comments section below.