Recently, Karan Kundrra was seen disagreeing with Tejasswi Prakash after the actress went ahead to cook for the VIPs despite their decision of revolting against them

Well, the Non-VIPs decided to revolt against the VIPs and went ahead to rob their food items too. Not just this, they decided to not do any duties assigned to them by the VIPs and hence decided to revolt against them to irritate them. However, Tejasswi Prakash refused to follow this and went ahead to state that she cannot say no for cooking. Tejasswi was of the opinion that refusing someone for food is not right. Well, this did not go well with Karan Kundrra, who was seen telling Tejasswi that he is not understanding what exactly is she trying to do. Karan went ahead to compare Tejasswi with Pratik Sehajpal and said that there is no difference between the two. 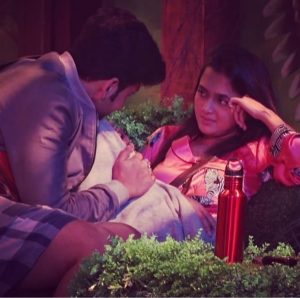 However, Tejasswi was seen raising a question on this statement passed by Karan and went ahead to ask him why is he saying this. Tejasswi was seen explaining her stand to Karan, however, Karan still did not agree with Tejasswi and said that he is not understanding what is she trying to explain. Tejasswi was also seen calling in Nishant Bhat to intervene, however, Nishant did not intervene and said that it is their personal conversation. Post which, Karan Kundrra was seen walking out while Tejasswi sat there, confused.

In the episode of Bigg Boss 15 today too, Karan was seen getting angry on Tejasswi Prakash for making plans with Nishant Bhat and for not including him and telling him anything. However, Tejasswi was seen holding his face cutely as she tried to console him.

Well, what is your take on this arguement between Karan Kundrra and Tejasswi Prakash?