In recent episode of Bigg Boss 15, audiences and fans can already see the increasing cold war between Umar Riaz and Ritesh growing more severe and violent as well. Read on to know more

We all know that especially in this season, Bigg Boss 15 has always been associated with physically aggressive fights in between contestants, using bad derogatory expletives against each other, taking stands for what is morally correct, and using physical strength along with playing mind games for going ahead in the game, we also know that the mindblowing and unexpected twists introduced by makers for keeping audiences and fans glued to their television screens are commendable as it makes the netizens and fans more curious and captivated and now post the wildcard entries, the show has gotten more challenging and thrilling along with the tadka of entertainment with Rakhi Sawant, Rashami, Devoleena, Abhijit Bichukale and Rakhi’s husband Ritesh’s entry in the house as the five new VIP contestants who have started to make the lives of contestants more tough and difficult as well and finally fans are loving fact that entertainment is back in the show after almost two months. 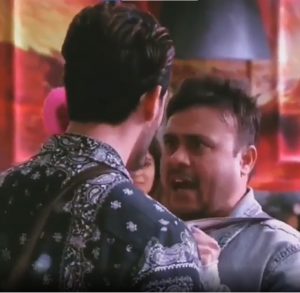 (Also Read: Bigg Boss 15: Karan Kundrra Issues Clarification On His Relationship With Tejasswi Prakash; Says, ‘It Is Personal And Not For The Game’)

Later on we see how Rakhi’s husband Ritesh comes into the picture and tries to interfere in same by pushing Umar and trying to scare and intimidate him for agreeing to it but then Umar loses his calm and cool over Ritesh and pushes him hard by using his physical aggression and strength which irks Rakhi and she comes in to defend her husband Ritesh but when both Umar and Ritesh are not ready to back down the fight gets more intense and later on we also see that when Umar says that he’s crossing his limits by not listening to them on this Umar says that he’ll throw him out of the house and even throw that star badge away on basis of which these five are flying so high.