Where fans are loving Mieshaan even after their eviction from the reality show, former Bigg Boss 15 contestant Miesha Iyer finally addresses her linkup rumors with friend Pratik Sehajpal via her Instagram story. Read on to know more

Where Bigg Boss 15 has always been about how the contestants play their game strongly with their mind and wit and also take stands for themselves whenever needed, it also places importance on how only it is the survival of the strongest and most loved celebs in the show that play a pivotal role in making the best out of the contestants by molding them into real winners who are also loved by audiences and fans.

In the last week, we all saw the eviction of fans and audiences most favorite couple Miesha Iyer and boyfriend Ieshaan Sehgaal which left many fans upset and disappointed as well, and now outside the house both Miesha and Ieshaan are setting Instagram ablaze with their romantic and mushy pictures and videos that go instantly viral on Instagram and take the internet by storm as well.

Both Miesha and Ishaan have been enjoying quality time together as a couple right from the last week itself and are painting the social media red in the color of their love for each other which makes the Mieshaan fans drool at their cuteness who drop in their love for this couple in the comments section.

Ever since Miesha has come out of the house, she has been getting trolled endlessly for trying to have a deep connection with Pratik Sehajpal inside the house and now finally breaking her silence on the same allegations against her, Miesha Iyer finally took to her Instagram account and posted a long note which clearly stated that to all those naysayers and trollers that have got so much to say about her linkup rumors with Pratik Sehajpal, yes she has done reality shows even before Bigg Boss 15 which means that her name has been linked to several people in the past but she has never confirmed anything as there was nothing special to say about it since it was only friendship and which is it. 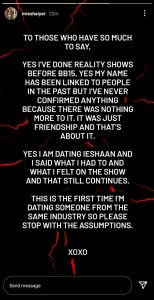 Agreeing on being heads over heels in love with Ieshaan and dating him, Miesha confesses in the note post that she is dating Ieshaan and she said all that she wanted to within the reality show which is still real as it continues.

She ended this note post by opening up on how this is her first time dating someone from the same industry she has requested everyone to stop with their assumptions related to her personal life.