Bigg Boss 15: Anupamaa Fame Aneri Vajani Supports THIS Contestant, Says ” That Contestant Has All Qualities Of Winning” – Find Out Who Is It

Tejasswi Prakash has a great fans base as many well-known faces have been seen supporting her looks like there is an addition in the list. Find out who is the one

Tejasswi Prakash is making her mark in the most talked-about reality show after conquering the television acting space. Tejasswi was a fun-loving and bubbly member of Khatron Ke Khiladi season 10 and is now lighting up the television screen with her mind-blowing performance in Bigg Boss 15. Tejasswi has proven her worth numerous times and is widely regarded as one of the most formidable contenders for the BB trophy. Tejasswi is capable of completing tasks as well as entertaining everyone with her playful banter.

Because of her nature, she has a large fan base outside the house. Aneri Vajani, one of Bigg Boss 15’s most ardent fans. She is a huge fan and supporter of Tejasswi Prakash. According to her, she is an all-in-one package; she is brave, entertaining, has formed bonds, and has gone above and beyond in tasks. Aneri Vajani believes she possesses all of the characteristics of a winner. Aneri Vajani’s role as Malvika in the show Anupamaa is currently capturing everyone’s attention. 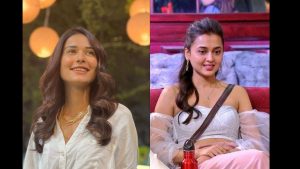 Previously, Adaa Khan was seen tweeting and showing her support for Tejasswi Prakash. We also saw Kashmera Shah come out in support of Tejasswi and bash Karan Kundrra for his behavior. She was also seen telling Tejasswi to focus on her game and the rest can be done after the finale.

Salman Khan will be seen yelling at Tejasswi Prakash in the upcoming Weekend Ka Vaar episode that she has been cursing the channel and showing her disloyalty to the show, saying, “Jis Thaali Mei Khaya Ja Raha Hai, Usi Me Chhed Koi Karta Hai,” he says. Tejasswi has been heard accusing the channel of supporting Shamita, for those who are unaware.”Salman also tells Tejasswi to stop playing the sympathy card. Tejasswi becomes enraged upon hearing the allegations and declares that she does not want pity from anyone, to which Salman Khan responds, ” Shut Up Tejasswi,” and goes on to say that she does not even respect Karan Kundrra her boyfriend.