Bigg Boss 15: After Karan Kundrra, Tejasswi Prakash’s Family Too Approves Of Their Relationship; Can We Expect TejRan’s Wedding After The Show Ends?

After Karan Kundrra’s family, Tejasswi Prakash’s family too has approved of the love birds relationship and the actor has gone ahead to address Tejasswi’s brother as his ‘Saala’ (Brother-in-law.)

Karan Kundrra and Tejasswi Prakash who have been garnering a lot of love for their budding chemistry and romance are finally on cloud nine. The actor was left elated after his parents approved of his relationship with Tejasswi Prakash and went ahead to address her as the heart of their family.

Well, after Karan Kundrra, Tejasswi Prakash’s family too has approved of her relationship with Karan Kundrra. In the live feed of Bigg Boss 15 today, the continuation of contestants interacting with their families on day 2 could be seen. It was during this that Tejasswi Prakash got a call from her brother Pratik Wayangekar. Pratik’s call left his sister Tejasswi quite emotional. However later the siblings were seen engaging into some fun banter. It was during this conversation that Pratik approved of his sister Tejasswi’s relationship with Karan Kundrra and went ahead to address him as his “Jiju.” Karan too was quite elated with this tag and addressed Pratik as his “Saala” (Brother in law.) Both Karan and Pratik were seen engaging into some fun banter and went ahead to pull Tejasswi Prakash’s legs. Pratik was seen stating that it is only Karan who could have handled Tejasswi and thanked him for beautifully taking care of her for the last three months. While listening to all of this made Karan beam with joy, Tejasswi Prakash too was happy of receiving approval from her family for her relationship with Karan. Both Karan and Tejasswi were then seen talking about how happy they are that their families have now agreed and how they will now spend their whole lives together. 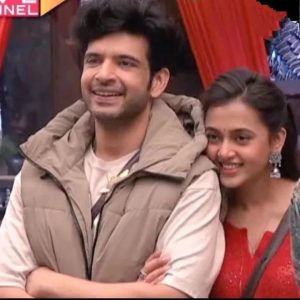 Well, in the episode of Bigg Boss 15 today, Karan will be seen asking his parents about Tejasswi who will then approve of the actress and call her the heart of their family, leaving both Karan and Tejasswi blushing.

What are your views on TejRan’s family accepting their relationship? Let us know in the comments section below.