Bigg Boss 15: After Her Eviction, Neha Bhasin Shared A Heartfelt Video With Her Fans; Thanked Them For Their Love And Support – WATCH

The latest eviction of Vishal Kotian and Neha Bhasin have shocked and disheartened their fans. Recently the singer took to her social media and shared a special message with her fans and followers. Check out Neha’s adorable video

Bigg Boss 15 has changed the game and in a big way. The show, which premiered on October 2, 2021, was struggling to find a place in the TRP charts and the hearts of viewers. Vishal Kotian and Neha Bhasin are the most recent contestants to be evicted from the house.

According to the live task, the bottom six contestants had to elicit a reaction from the top five contestants with their amusing antics. While others were able to do so, Vishal and Neha were unable to do so, resulting in their shocking exit from the show. Neha, who had previously appeared on the digital version of the show, joined Bigg Boss 15 a few weeks ago. 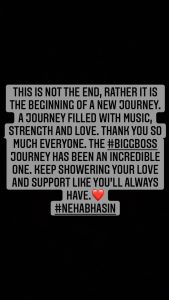 Recently, the singer took to social media to share a heartfelt message with all of her fans and followers. Neha can be seen interacting with her fans in the video, telling them that she has a lot to say but will keep it brief. She stated that “As you all know, I am hungry for love and very fond of affectionate feelings and that all of you have showered immense love on me for which she is grateful. She also assured her fans that she’s completely fine and that they should not worry about her. Neha stated at the end of the video that she adores them all.

Neha was dressed in a blue nightshirt as she took a selfie video in her cluttered room. The singer also shared a story in which she stated that her Bigg Boss journey was fantastic and that it was not the end of an old journey, but rather the beginning of a new one. She also reposted stories from fan pages that were deeply affected by the news of her eviction.

(Also Read: Bigg Boss 15: After Jay Bhanushali, These Two Contestants Get EVICTED From The BB House; Names REVEALED – SEE Inside)

Fans have been captivated by the singer’s melodious voice. Bhasin has seven Filmfare nominations in various languages and two Filmfare Awards for her songs “Jag Ghoomeya” (Hindi) and “Paani Ravi Da” (Tamil) (Punjabi).