Bigg Boss 15: Afsana Khan Dashes Off To Punjab After Getting A Panic Attack; Singer Unlikely To Continue Her BB Journey

Afsana Khan who was rumoured to be participating in the Bigg Boss 15 house is now reported to have backed out of the show last minute. As per the online reports, Afsana Khan recently got a panic attack

Well, if reports are to be believed, the popular singer has opted out of the show last minute. Yes, According to reports, Afsana suffered a panic attack yesterday and decided to call off her Bigg Boss 15 journey. Afsana, who was being quarantined in a hotel in Mumbai was immediately given medical help. However, she decided to call off her decision of entering the controversial reality show and has reportedly returned to her home town Punjab.

If reports are to be believed, Ace of space fame Meisha Iyer will now be entering the Bigg Boss 15 house in Afsana’s place.

Talking about Afsana, the singer had posted a story on her Instagram handle asking her fans to pray for her as she was unwell. 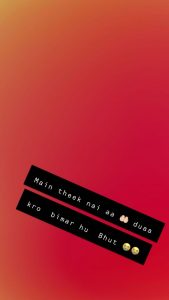 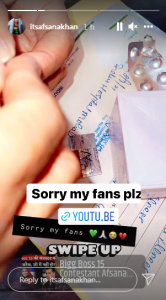 Afsana Khan has given the popular song ‘Titlian wargah’ her voice and is a renowned name in the Punjabi industry.

Have a look at a few pictures of Afsana Khan:

(Also Read: Bigg Boss 15: After Umar Riaz Gets Confirmed For The Latest Season He And Asim Get Called ‘Kashmir Ke Ladke‘; But His Answer Is Winning The Internet)

Well, we wish a speedy recovery to the gorgeous singer.