Bigg Boss 15: Abhijit Bichukale Poures His Heart In Front Of Devoleena Bhattacharjee While Talking About His Mother

Bigg Boss 15: Abhijit Bichukale was seen pouring his heart out in front of Devoleena Bhattacharjee and was seen crying as he regrets as well as feels blessed because of his mother

Devoleena Bhattacharjee and Abhijit Bichukale have been the subject of much speculation for a variety of reasons. As we saw during the Ticket To Finale Task, Abhijit betrayed him and the two got into a big fight. When Abhijit was caught flirting with Devoleena, she became enraged. Abhijit’s decision to form a group with Rashami Desai and Umar Riaz to cancel the Ticket To Finale task irritated Devoleena, and she doubted Abhijit’s commitment to her.

We later saw Rashami, Umar, Abhijit, Devoolena, and Rakhi in the garden area, where Abhijit was singing a song for Devoleena to which Rashami was also seen singing along with him, while Rakhi made fun of him, to which Devoleena laughed out. 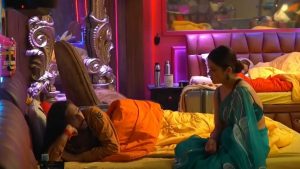 Later, Abhijit Bichukale and Devoleena were seen conversing, with Abhijit disclosing some of his family problems. He was overheard saying that Bigg Boss is looking after him and that Devoleena is on her priority list. Devoleena responded that it wasn’t just him; if anyone else had been in the same situation, she would have done the same thing. Abhijit tells Devoleena that she has a lot of problems, and Devoleena responds that he, too, has a lot of problems. Later on, Devoleena was seen talking to Abhijit Bichukale where Abhijit was seen talking about his mother as Abhijit’s father was a drunker and his mother was concerned about the future of his kids because of his father.

Due to which she has to leave his father as she was in charge of two children. His mother had worked extremely hard for him, as had his mother’s parents, who he regards as his Yashoda. In the midst of it all, he didn’t give his mother much thought. Devoleena was seen comforting him and telling him not to cry in response.