As we near the end of 2020, here are some heart-warming moments from Neethane Enthan Ponvasantham and Sembaruthi that will stay with us.

On one hand, in Neethane Enthan Ponvasantham, Surya and Anu are fighting against the odds to get together. On the other hand, in Sembaruthi, hurdles bring Adithya closer to his mother Akhilandeswari. As the year ends, let’s take a look at a few of the most heartfelt moments from our favourite shows in 2020.

When Anu is not successful in meeting Surya before his trip to London, she becomes extremely sad. Surya then decides that it is impossible for him to go to London without meeting Anu and shows up at her place at night. This moment had everyone in tears and made us want to get them together!

For a brief while on the show, Muthurasan had lost his sight and couldn’t see his loved ones for very long. Soon after Vennila escaped Namboodri, the doctors were able to gift his sight back to Muthurasan and he finally saw his daughter and wife after long. This moment instantly had everyone in tears.

3) Sembaruthi: When Adithya came to save Akhilandeswari at the right time

When Akhilandeswari almost got arrested, Adhithya stopped it just when she was getting cuffed. He reached out to her and jumped to her aid at the first chance that he got without thinking of anything that happened in the past. He halted her arrest with a court order and finally spoke to his mother!

When Anu met Surya after very long, she couldn’t resist getting a gift for him and gave him a jasmine plant that he very dearly cherishes now. They later went on to feed each other ice cream while being lost in each others’ eyes and fans just couldn’t get over it!

Muthurasan’ s rage knew no limit when he got to know that his wife was put through hell. Later to calm Muthurasan down, Vennila discloses to him the very good news. Once Muthurasan learns this, his anger vanishes and he is overjoyed on learning that they are going to have twins. 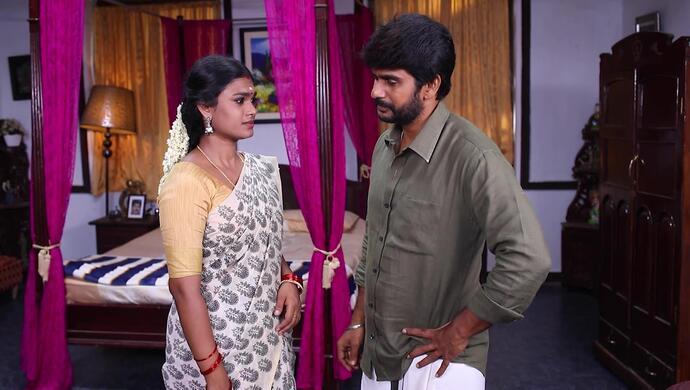 6) Sembaruthi: When Adhithya lifts Parvathi and takes her home

When Parvathi regains consciousness, Janaki Amma helps her walk home but Adithya insists on taking her home in his arms and lifts her up. This makes her blush really hard and they share a moment together. This was a very heartwarming moment for the duo and the viewers.