Ashmit Patel Finally Breaks His Silence On His Break-up With Girlfriend Maheck Chahal; Reveals The Reason Behind Their Separation

Opening up on his side of the story related to a past relationship, Ashmit Patel revealed why he got separated from his girlfriend Maheck Chahal. Read on to the real reason

Everyone knows how Ashmit Patel and Maheck Chahal were good friends for more than a decade and also had been in a romantic relationship for almost five years when Ashmit finally had proposed to her and popped the question.

But then after an entire year because of some compatibility issues, their relationship had started hitting the rocks and also went through a rough patch as well which ultimately ended with both of them permanently calling off their marriage and breaking up with each other.

Ashmit And Maheck were former Bigg Boss 4 and Bigg Boss 5 season contestants and also had participated in a renowned couples reality show four years back in 2017 and post being heads over heels in love with each other for past so many years, Ashmit had finally popped the question to her in Spain and there were rumors of them getting married soon. But their separation news had left most of their fans shocked on social media. 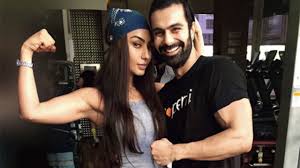 After Ashmit and Maheck had broken up, Maheck in her interview with a leading publication had said about how she had to just walk out and take that step for herself which she did by leaving Ashmit.

Now finally in his recent interview opening up on his past relationship with Maheck and also speaking about how he is moving on, Ashmit clearly stated about Maheck being right about both of them not being the ideal ones for each other and he didn’t even want to argue on that at all as that is the reason of them breaking up as when a person realizes he or she is not right for each other, it is a good choice in moving on.

Opening up on his current relationship status, Ashmit Patel reveals that he has been dating this wonderful girl for the past few months and since it is a new relationship he doesn’t want to reveal too much about her.

He also mentioned how they both met each other at a juncture when they both had been looking for a life partner, so that feels good. He also added that he is not sure about marriage yet as he enjoys her company and being around her.

If the relationship progresses well, they both might think of marriage. But right now, they are just honing their relationship skills and helping each other grow spiritually, mentally, and emotionally.