Anushka Sharma shares Steven Bartlett’s tweet on the kind of social media users and we believe it’s absolutely true. It’s about how users can spot toxic behaviour in others, but forget to reign themselves in. This is her way of telling every troll who slammed her for Virat’s Kohli on-field performance.

Anushka Sharma has never shied away from pulling up anyone who used social media to slam her. She has often been made a target of abusers when Virat Kohli messes up a match. She has stood up to them always. Guess today she was equally riled up. The actress has shared Social Chain Founder and CEO Steven Bartlett’s tweet on how social media users work. His tweet says, “Social media is full of people that can spot toxic behaviour in everyone but themselves. The world doesn’t need more critics, it needs more self-awareness.” We wholeheartedly believe it to be true.  Anushka Sharma Lifts Hubby Virat Kohli and It Is the Cutest Thing You Will See Today (Watch Video)

Anushka has often put the trollers in their right place who have questioned her for everything from attending Virat’s matches to much more. Without getting bothered by them, she has managed to make it a point to make sure they know she isn’t the person who is playing the game on the field. 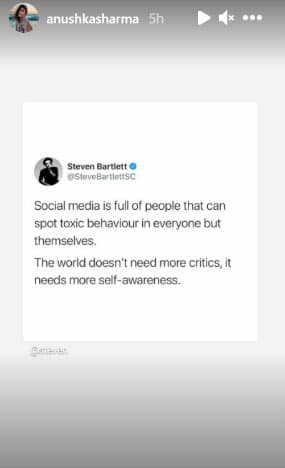 Anushka and Virat recently welcomed a new bundle of joy in their lives, their daughter Vamika. The couple also celebrated her one-month birthday. While Virat is gearing up for the IPL 2021 now, Anushka has also started shooting.