ANGELINA Jolie and The Weeknd had “dinner together” as dating rumors continue amid the actress’ stressful divorce from her ex-husband Brad Pitt. It’s the second time that the two have been seen together

Actor Angelina Jolie, 46, and The Weeknd- the musician who is also known as Abel Tesfaye,31- were spotted in Santa Monica.

Angelina and her ex Brad, 57, divorced in 2019, but the former couple is still locked in a tense custody war over their six children. Angelina was previously married to the Once Upon a Time in Hollywood actor, 57, back in 2014.

In September, Angelina accused her ex of using his “celebrity” status to try to gain special treatment in their custody agreement.

Angelina’s legal team stated: “This sort of gamesmanship, a last-ditch effort by a celebrity litigant seeking special treatment, is not what this Court’s limited review resources are for. There is nothing to see or review here. There is no issue meeting this Court’s rigorous standards for, or worthy of, review.” 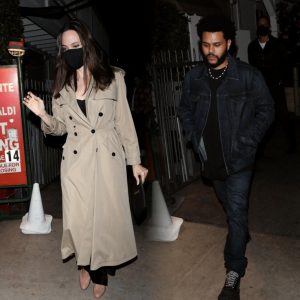 DID IT START AT GIORGIO BALDI?

At the beginning of July, Angelina appeared to be on a romantic date night with the musician in Los Angeles. The pair reportedly spent hours at the restaurant, before leaving separately to avoid raising suspicion. Back in July, the two had been “spotted on another secret date at a private concert in LA,” according to Instagramer Deuxmoi.

The Eternals star and the entertainer were seen at “Mustafa’s private concert.”

DATE WITH THE WEEKND

The two appeared to be dining together at the Italian restaurant, Giorgio Baldi. The Oscar winner and the Starboy hitmaker, 31, had reportedly spent about two and a half hours at a private section inside the restaurant.

Angelina reportedly arrived at the establishment separately during the night and walked out of the building with him. The two then hopped into a black SUV that was waiting for them.

Angelina wore a black double-breasted trench coat and carried with her a Yves Saint Laurent purse. Meanwhile, The Weekend wore a black jacket with skinny jeans and boots.