Amitabh Bachchan Shares A Still From His First Film With Jaya Bachchan And It Takes Us To A Different Era!

One of the most loved couples of Bollywood, Amitabh and Jaya Bachchan shared a still from their first film together ‘Bansi Birju’

Amitabh Bachchan enjoys sharing various stills from the previous era and as an actor who’s gained a lot of popularity by displaying his versatility has been an individual favorite of the viewers. The actor once again shared a beautiful Sunday throwback with his wife Jaya Bachchan where the two were seen sharing the screen space for the first time in 1972 with the film Bansi Birju.

In the photo, Amitabh and Jaya Bachchan are seen hugging each other and are in a somber mood in the black and white era. Amitabh captioned the picture as,”our first film together .. ‘Bansi aur Birju ‘ .. released Sept 1, 1970 .. that’s 49 years ago !!!”

However, there’s a minute calculation error as the film released on September 1st 1972 which makes it 49 years ago. The couple’s daughter, Shweta Bachchan commented ‘Love you both’ while grand daughter Navya Nanda dropped a red heart emoji in the comment section. 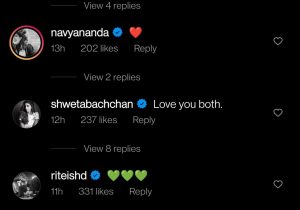 In Bansi Aur Birju, Amitabh played Birju while Jaya played Bansi. The couples first film was directed by Prakash Verma. Amitabh and Jaya were also seen sharing the screen space together in many other movies like Sholay, Abhimaan, Silsila, Kabhi Khushi Kabhie Gham and many more.

The royale couple tied the knot on 3rd June 1973 and flew off to London. The couple is also been spotted at various events together often and their love hasn’t faded a bit since

An interesting story attached to their love story is that they were allowed to fly to London only if they were married to each other and was a mandate by Harivansh Rai Bachchan. Without wasting any hour on the clock, Amitabh quickly tied the knot and wrapped up the wedding rituals and took the flight.

Amitabh was last seen in Chehre with Emraan Hashmi. The film is directed by Rumi Jaffery and also features actors like Rhea Chakraborty, Krystle D’Souza, Annu Kapoor, and Siddhanth Kapoor among others. It was supposed to release in 2020 but got delayed due to the ongoing coronavirus pandemic.