Popular for her on and off the screen dramas, Amber Heard knows how to keep her social media blazing. The 35-year-old Hollywood actress, in the latest video, appears having a great time with street food.

Hollywood dive Amber has more haters and trollers than her fans. Once an actress with a great fan following, Amber Heard has turned into a villain for many ever since she had the divorce drama with her ex-husband Johnny Depp. Nonetheless, the actress doesn’t provide any negative fame to enter her world. And, in the latest video, she appears to do the same. This time, more sassily. 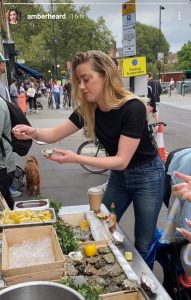 Amber Heard can be seen standing at a street food joint somewhere in the US. The Mera from Aquaman has a seashell in her left hand as she pours lemon juice in it. Later on, Heard can be seen adding some red sauce to the thing present in her seashell plate.

As soon as she completes filling her seashell, she takes all the substances present in the seashell in her mouth, except the seashell, obviously. Termed as drama queen by many, Amber Heard does know how to give killing reactions both on and off the screen. The 35-year-old actress is quick enough to provide a stunning look as she approves the seashell food of its taste.

Amber Heard appears classic in the video as she is dressed in simple yet stylish attire. The actress sports a black T-shirt along with dark blue jeans as she appears having a street food blast with her female company.

Though Amber may appear a complete party enthusiast, she does know how to fulfill her responsibility. The actress took to Instagram on Friday as she shared a photo of her doing a dumbbell exercise with her left hand while having her little daughter Oonagh Paige in her right hand.