In the latest video, uploaded on Friday evening, the Mera from Aquaman appears approaching a rehearsal set in funky attire. However, the hungry actress gets shocked as she reaches the empty set.

Known for glamour avatar, Amber Heard knows how to dress modern. The popular Hollywood actress appears stylish wherever she goes and even appears dressed classic at home. A fashionista in the true sense, Amber Heard also knows how to maintain her physique and that’s the reason behind her fitness.
In her latest video, the fit and fine actress provides a glimpse of her travel to a stunt rehearsal area.

The latest post
Uploaded on Friday evening, over her official account on the popular social media platform Instagram, Amber heard can be seen in a video where the star appears getting down of a vehicle, most probably a vanity van. 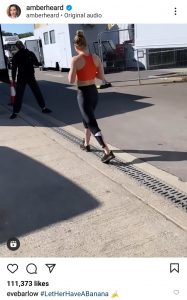 As she walks past a trainer in the video, Amber Heard speaks about how desperately she needs a banana. Though she also mentions that she can’t have one as it has a high sugar level and she just got two points over her desired sugar level result.
However, she still, twice, emphasises her inability to eat a banana even though it is a fruit.
Nonetheless, as soon as the Mera of Aquaman enters the stunt rehearsal area, she is taken by surprise. The actress quickly discovers the set to be empty and insists to go home.

In the video, the 35-year-old actress appears quite funky in an orange sports bra along with black sports legging and matching black shoes. And as soon as the video starts, Amber heard, geared in sporty and training attire, is handed an orange sipper, thus providing a furthermore match to her attire.
Meanwhile,
Amber Heard is set to reprise her role as Mera for the third time in the DC universe. The actress is currently shooting for Aquaman and the lost kingdom which is set to hit the box office on December 16th, 2022.
However, just two days back, the actress has asked the LAPD for all the files related to her 2016 domestic disturbance incident involving Amber and her ex-husband Johnny Depp. Amber, meanwhile, appears in no mood to end the divorce drama anytime soon.