Akshay Kumar starrer Laxmii’s second track Bam Bholle has created a tremendous buzz online ever since its release. The high-tempo song sees Akshay Kumar in a rare avatar with exceptional visuals. The upbeat track has already become a fan favourite and netizens have openly appreciated the song. Here’s a quick glimpse of how fans are reacting online after watching Bam Bholle:

Bam Bholle features Akshay grooving to its high-rhythm with energetic moves which has made a few fans say that he is an actual ‘superstar’. While many loved his tribute to Lord Shiva, others called the song ‘majestic’ and ‘wonderful’. Fans were quick to notice the versatile dance moves of the actor and the pace with which he shifted to perform Shiv Tandav, which left many with ‘Goosebumps’.

Along with Akshay Kumar’s dance, fans are also loving the music and lyrics of the song. In the above video, we can see Laxmi Narayan Tripathi lauding Akshay Kumar and the makers of the film for representing transgenderism in a positive light onscreen. She pointed out Akshay’s fierce clap and went on to explain the ‘ying and yang’ energy system. Along with receiving immense love, the song has crossed over 2 crore views online.

In the song we can see, Akshay Kumar donning a red saree and dramatic makeup which accentuates his intense expression throughout the track. Post watching Bam Bholle, fans have already declared that Laxmii is going to have a ‘blast’ with Akshay’s ‘powerful’ energy added to it. Many are yet unable to believe that it was Akshay Kumar who performed in the song. Take a look: 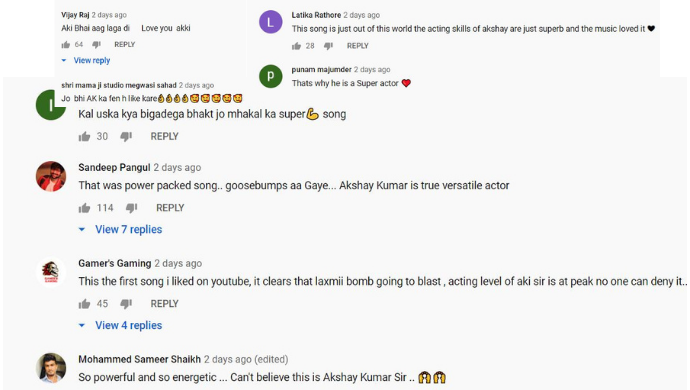 The powerful moves of Bam Bholle were choreographed by Ganesh Acharya. Crooned by Viruss, the music was composed Ullumanati. With stupendous visuals, the song has got all the elements of being a super-entertainer.

Meanwhile, Laxmii is scheduled for a release on Monday, November 6. Helmed by Raghava Lawrence, the film is the remake of the Tamil comedy horror Kanchana. Along with Akshay, Laxmii also stars Kiara Advani in the lead role.

Watch the latest trending news only on ZEE5.