As Ahan Shetty is turning a year older on December 28, 2021, we cannot help but look back at the fact how this year has been quite promising for the debutant and on his special day. Father Suniel Shetty and sister Athiya has poured their heart out for the ‘little Shetty’ and you can’t afford to miss this

Suniel Shetty’s son Ahan Shetty has had a promising 2021, the debutant made waves on the web and is on his way to cement his career in the tinsel town with his raw and alluring acting skills. Not only did he bag a project with a senior actress Tara Sutaria but, his debut film, Tadap has proved that the young starlet is no less than a star in the making. Also, the actor is celebrating his 21st birthday on December 28, 2021, and what has taken the web by the storm, father Suniel Shetty and sister Athiya Shetty have poured their heart out on IG.

taking to his gram, Suniel Shetty poured his heart out for his son, Ahan on a special social media post and mentioned that he loves his son and he is proud of the man Ahan is becoming. Also, Suniel Shetty shared a cool and casual picture of the debutant and penned down the sweetest note for him. The message will make you smile from ear to ear.

Also, Suniel Shetty mentioned that his son is his huge pride, joy and he added that his son, Ahan has given him many reasons to be proud and he loves saying to people that Ahan is ‘HIS SON’. Suniel Shetty blessed him with luck, adventure, joy, and thrill and he embarks on his new journey and imbibes lessons of hard work and gratefulness in him. His father and actor told him to love his journey and also advised him to put his best foot forward, always.

In the end, Suniel Shetty wrote, ‘Ahan Shetty’s papa.’ with a black emoji beside it and it will make you smile instantly. 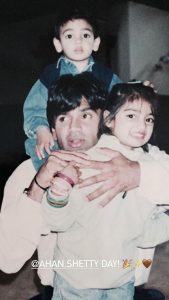 Also, sister Athiya Shetty shared super adorable throwback pics of hers with Ahan and her father Suniel Shetty and she even describes him as the ‘Best Boy’ in one of the pictures. 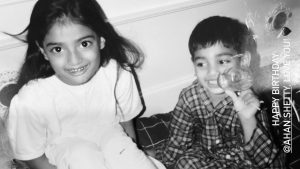 Athiya Shetty’s pics are unmissable on the web and it will make you fall in love with Ahan Shetty, that’s for sure.