Aggabai Sunbai: We’re Totally Digging The Repartee Between Abhijit And Ajoba, Here’s Why!

Abhijit and Ajoba have long buried their hatchet and seem to have gotten much closer, we love their camaraderie. Here’s why!

Remember the time when Agga Bai Sasubai’s Ajoba and Abhijit were always at loggerheads? Well, long gone are those days. Now, in Aggabai Sunbai, the two of them share a sweet bond and we love their camaraderie. In fact, it is one of the best things going on in the show right now. Abhijit and Ajoba have long buried their hatchet and seem to have gotten much closer. We’re totally digging their repartee and we’ll tell you why. Read on.

Many things have changed in Agga Bai Sasubai’s sequel but Ajoba has remained the same. Except, now he can tolerate Abhjit around him. Their current dynamic reminds us of the time when Ajoba could not even stand him. He used to think of Abhijit as nothing more than a ‘chappal chor’ who did not have any ‘sanskar’ at all. Much to his disappointment and our amusement, Abhijit paid no heed to what he thought and went on with his life.

Their relationship met with a major setback when Abhijit expressed his wish to marry Asawari. They recovered soon after and have been close ever since. But that isn’t why we’re digging it, it is because their repartee is the only thing on the show right now that makes us giggle non-stop. Their equation lightens up the otherwise thick atmosphere of the Kulkarni household and that is why we love it so much. 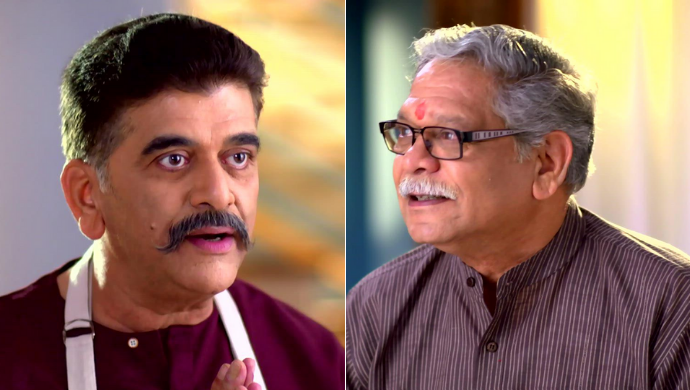 The way Abhijit keeps saying ‘ata mhatara jhala tu, tula kai mahit nai’ (you’ve become very old now, you know nothing), cracks us up each time. From constant bickering to calling each other names, their relationship is beyond adorable and keeps the fun element alive in their house. Abhijit even calls him ‘Datta’ (short for Dattatraya) and it reminds us of another adorable father-son duo with the same name. It is Dattatraya (Amitabh Bachchan) and Babulal (Rishi Kapoor) from the film 102 Not Out. Even they shared a very sweet bond and keep pulling each other’s leg!