In Aggabai Sunbai, Shubhra’s take on the advertisement has prompted Soham to berate her, what will she do next? Read on

In Aggabai Sunbai, we recently saw a different side of Shubra that impressed us immensely. As it turns out, she’s got a flair for good business ideas and we’re loving this side of her. So far, we’ve only seen her as a doting mother and a dutiful wife or daughter-in-law. But now, she is suddenly a confident lady giving out smart business ideas and making everyone proud, except for Soham. He is just jealous of her and probably sees her as a potential threat. That is why he berated her and tried to break her newfound confidence. Read on.

What happened was, Asawari called Shubhra for a meeting regarding their new advertisement. That Ad was rapidly decreasing their sales and Asawari wanted Shubhra’s explanation as to why that’s happening. Shubhra’s response to her question left everyone shocked and impressed at the same time. She said that customers (in this case housewives) won’t buy the product if it does not make them feel important. She confidently stated that the advertisement is hurtful to their sentiments which is why the sales have gone down. 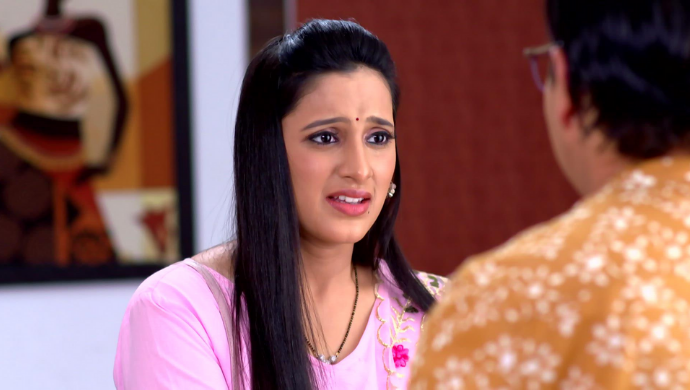 While her response impressed everyone, Soham did not like it one bit. He felt jealous and later berated her for foiling his work plan. He blamed her for spoiling his business ideas and for tampering with his reputation at the office. After listening to his insults, Shubhra promised him that she’ll return home and won’t interfere with his work again.

Shubhra is shown to be quite a timid woman. Even though she had a moment of confidence, Soham made sure to spoil that thoroughly. It is quite possible that she goes back to being the demure lady she was and never returns to work again. Meanwhile, it is also possible that Asawari might encourage her to join their family business and be involved with it regularly. Even though, Shubhra has the potential to become a successful businesswoman, she also has other household responsibilities. This puts Shubhra in a difficult position and it will be interesting to find out how she navigates through it.