Aggabai Sunbai: Shubham Is A Spitting Image Of His Father Soham?

We think Shubham and Soham are very similar to each other, here’s why!

In Aggabai Sunbai, Shubhra and Soham have an adorable boy who keeps everyone in the Kulkarni family on their toes. He is a sweet and notorious boy who brings joy to the Kulkarni household. While we haven’t have seen a lot of Shubham yet, we can tell that he is similar to his father in many ways. Whether be it in a good way or bad, we think Shubham is the spitting image of his father Soham, here’s why!

1. They both hate to study

Both Soham and Shubham absolutely hate studying! When Soham was in college, he would skip his classes and flunk his exams. He would have Shubhra do his assignments and took education lightly. As for Shubham, he too doesn’t like attending his online classes. He even paid his classmate Rs. 200 to get his homework done.

Both of them have a bucketful of tantrums but in a really fun way. Like many other kids, even Shubham does not like eating his veggies or doing his homework on time. If things don’t go according to him, he takes extreme measures like climbing on top of a cupboard and refusing to jump down. Well, we all know where he picked this habit from – Soham obviously. In fact, it was him who indirectly gave Shubham the idea to do something like that. 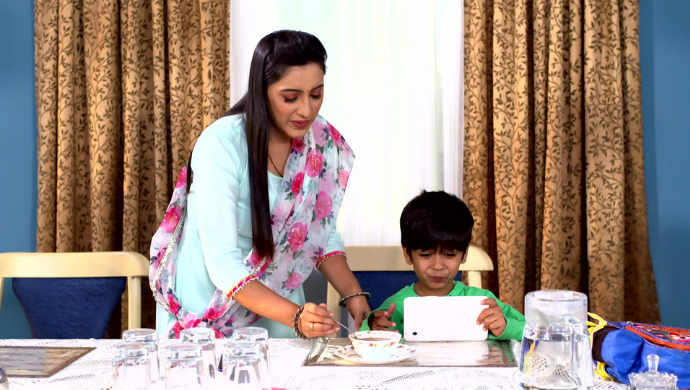 Both of them are big-time mama’s boys, whether they like to admit it or not. At least, Soham doesn’t! However, he cannot do without his mother. He might hurt her, make her angry, but he cannot live without her. The same goes for Shubham, he wants his beloved aai all the time. Well, like father like son.

4. Tricks to get off the hook

Something which is very similar in Soham and Shubham is the ability to get off the hook easily. Like, no matter what situation they are stuck in or how big a mess they have made, they almost always escape punishment easily. While Shubham uses adorable puppy eyes, Soham has ‘other tricks’ up his sleeve.

While Soham and Shubham’s grandparents are starkly different, they both share a bond with them nonetheless. We have already seen the fun repartee between Soham and Ajoba, and now we’re seeing Asawari and Soham bonding from time to time. It is really sweet and heartwarming to watch.

These are the reasons why we think Soham and Shubham are the epitome of the phrase ‘like father like son’. Can you think of more similarities between the father and the son? Do let us know.