These moments prove that the Kulkarni family in Aggabai Sunbai loves to spend quality time with each other and is #FamilyGoals.

Zee Marathi’s newest show, Aggabai Sunbai revolves around the Kulkarni family, and they are quite unique if you take a closer look! The family consists of the matriarch, Asawari Kulkarni Raje, the founder of DBK foods, Dattaraya Ajoba, Asawari’s father-in-law, Abhijeet Raje, her husband, Soham, her son, Shubhra, her daughter-in-law and Shubham, her grandchild! They share meals, they celebrate festivals together and they always worry for each other.

This family of six is extremely wholesome and sweet and we want to share with you some moments that made us go aww!

When Asawari makes Gharge for the family

Everyone is tired of Asawari going to work every day and they want to spend some time with her. So Shubhra, Ajoba and Abhijeet come up with a plan to ignore Asawari so that she is miffed. She leaves for work because no one pays her any attention and she feels underappreciated. Later, she gets a call from Shubhra informing her that Ajoba is sick and needs a doctor urgently. The doctor informs Asawari that Ajoba needs rest and care. And that everyone must “listen to him for a day in order for him to feel better.” Ajoba demands Gharghe made by Asawari alone and she goes to the kitchen to make them!

Also read: Aggabai Sunbai: Does Suzzane Want To Be More Than The “Other Woman” In Soham’s Life? 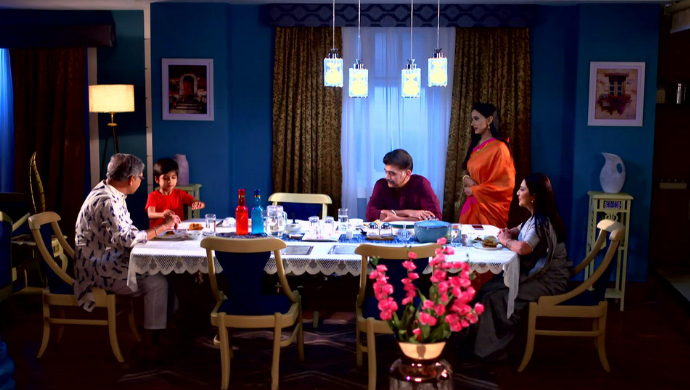 Asawari is unable to find Atta but Abhijeet helps her out. Asawari does not want his help and tries to pick up the big box herself but fails! The flour falls on the floor and on Asawari and Abhijeet! When Shubhra, Shubham and Ajoba come in to see what the noise was about, they find a laughing Asawari and Abhijeet and join in on the fun! By the end of it, everyone has flour on them and is smiling wide! Later, they all sit together and feed each other. Ajoba feeds Shubham, Abhijeet feeds Asawari and vice versa. It is adorable!

While a lot of things happen at the Holi event, we saw the Kulkarni family embrace the festival with all their hearts. While Asawari does not like colours, Abhijeet surprised her by showering her with petals. Shubham played with colours and they all danced, including Shubhra and Soham. Later, Shubhra even sang a lovely song that left everyone mesmerised including Soham, Abhijeet and Asawari!

When Soham takes Shubhra out on a date

Everyone is so excited when Soham decides to take Shubhra out on a date. Especially Asawari and Abhijeet, who want their relations to be strong. They lovingly adore Shubhra as she steps out in a lovely saree. Asawari even makes Shubhra wear her earrings because she is so happy. They also agree to look after Shubham while the couple is out and the atmosphere in the house is so wholesome! Later, Abhijeet and Shubham even crash their date because Shubham misses Shubhra and she lights up at the sight of her son!

When Asawari and Abhijeet both think that Shubhra has spent too much time at home, they try to encourage her to step out in their own ways. Asawari asks her opinion at work for a sales project. Abhijeet pushes her to meet her old friends after forever. He takes her along to the DBK Foods office on the context of making food so that she can step outside and interact with the world. These thoughtful and sweet things that they do to push Shubhra out of her comfort zone and achieve her true potential is what makes them a family!