Agga Bai Sasubhai: Asawari and Abhijit Prove That When You Are Blessed With True Love, You Don’t Really Care for Money in Your Life

After losing all their wealth, Asawari and Abhijit have left their house and started a new life. Here is what they are upto

Zee Marathi’s popular show Agga Bai Sasubai witnessed some major drama in the recent episodes that drastically changed the entire narrative of the show. In a ruthless takeover, Soham assumes the proprietorship of Abhijit’s business following which he and Asawari leave their house to start a fresh life. Even though Soham stops his mother from leaving, she chooses love over money and leaves with her beloved husband.

Asawari and Abhijit decide to leave their house behind and start a new life when Soham harshly rebukes the latter even after acquiring all his wealth. Abhijit gets down on his knees and professes his love for Asawari, saying that even though he has lost everything he still has one thing, that is his beloved wife. He says that her love is enough to make him the happiest man in the world and promises to never leave her hand.

They take a taxi and set out on a new journey together, ready to embrace a fresh start. Abhijit buys balloons for Asawari and her happiness seeing the balloons just melts his heart. Later, they enjoy the sunset at a beach and Asawari’s footwear gets broken. Even though she does not let Abhijit know about it, he eventually finds out and gives his footwear to her while he walks barefoot. How pure is their love? 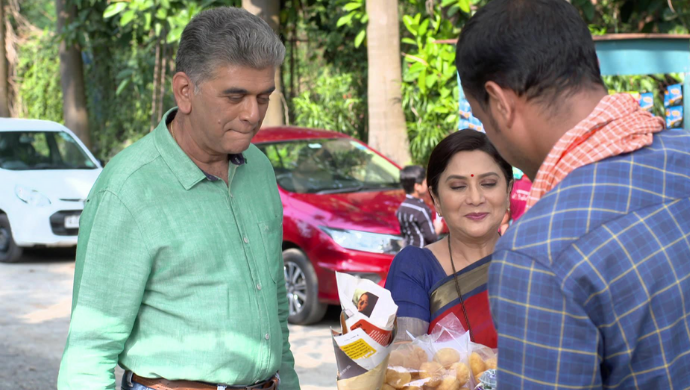 Soon after, Asawari spots a bhel stall and wishes to eat some bhel. Abhijit happily obliges to her wish but orders only one plate as the amount of cash in his wallet worries him. Later, he helps an old man with his luggage who gives Abhijit some cash for his good deed. He uses that to buy water for Asawari when she realizes that they are running out of money. Abhijit cheers her up and asks her to enjoy these small moments.

Later, they spot an injured old man and help him. They also cook for him and on his request, join him for the meal. With no money in their pockets or anything else at their disposal, Abhijit and Asawari have proven that their love is stronger than ever. They do not need wealth, but only each other’s company to lead a happy and blissful life.