Agga Bai Sasubai: Instances That Prove Asawari Is Warming Up To Soham And We May See Them Reunite Soon

On Agga Bai Sasubai, there have been some instances that make us believe Asawari has begun warming up to her babdya and we’ll see them unite very soon, read

In the recent episodes of Agga Bai Sasubai, we saw that Soham has finally come to realize his mistakes and is trying to make amends with Asawari. Despite his attempts, Asawari has refused to forgive him and is now more stubborn than ever. Even though she is adamant about not forgiving him, there have been some instances that make us believe she has begun warming up to her babdya and we may see them unite very soon.

1. Asawari teaches Soham how to make a kadha

When Ajoba suddenly develops a severe cough at night, Soham gets really anxious seeing his grandfather ill and ends up video calling Asawari. She tells him how to make a kadha (concoction for remedy) over video call and they share a sweet moment together.

When Shubhra and Soham visit Asawari and Abhijit on the occasion of Makar Sankranti, they win a kite-flying competition and celebrate their victory by going to a temple and distributing ladoos to everyone. Asawari hands out ladoos to everyone but hesitates before placing one in Soham’s hand. Eventually, on Maddy’s behest, she ends up giving him a ladoo.

In a bid to surprise Shubhra, Soham tries making ladoos but ends up making really bad ones. They are so hard and solid, that they’re almost inedible. When Maddy tries to chew into the ladoo, she almost loses her teeth and everyone ends up laughing. Despite the ladoos being a fiasco, Asawari has a proud expression on her face, and it’s evident that she misses him. 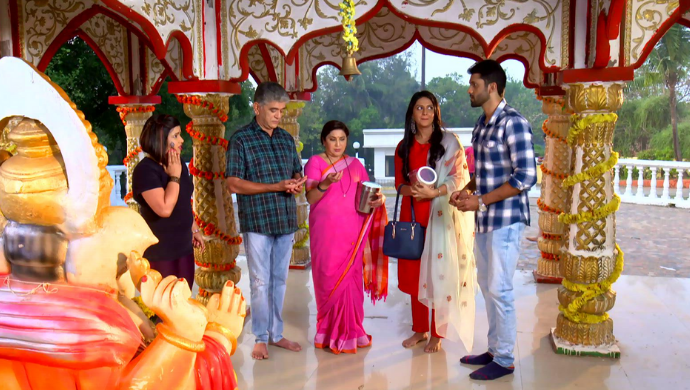 Soham’s ladoos leave everyone in splits and while they’re all laughing, Maddy points out that they all look like a big happy family and takes their picture. Hearing this, Asawari gets momentarily emotional but composes herself soon after. Her expressions make us believe that she has slowly started warming up to Soham.

The whole dispute between Asawari and Soham began after he maliciously took over Abhijit’s business. After he realized his mistakes, he handed over Abhi’s kitchen to Shubhra and later to Ajoba. This gesture of Soham got Asawari to believe that there’s still hope for Soham to change. Do you think Asawari will forgive him? We hope so.