In the next episode of the Zee Marathi show Agga Bai Sasubai, we will see how the Kulkarni house is decorated as it is Shubhra’s Mangalagauri Puja and everyone is invited from the complex. But Soham leaves in the morning making an excuse for going to an important meeting. Shubhra tries to stop him and requests him to come home soon. Later, when the ceremony and the rituals begin, all the women gather at Asawari’s house. Shubhra asks Asawari to perform the puja but Pradnya taunts her saying how she would know how to do it. But Shubhra shuts her up and asks Asawari to go forward with the rituals.

Later, Pradnya mistreats Karkhanis Kaka and his wife. She tells her mother-in-law to stay home and asks her to not go to Shubhra’s house as the rituals are being done by Asawari who was a widow and she does not support this forward thinking. She even gathers all other women in her house and asks them to stay there. But Asawari comes and asks them to come for the puja in the evening. 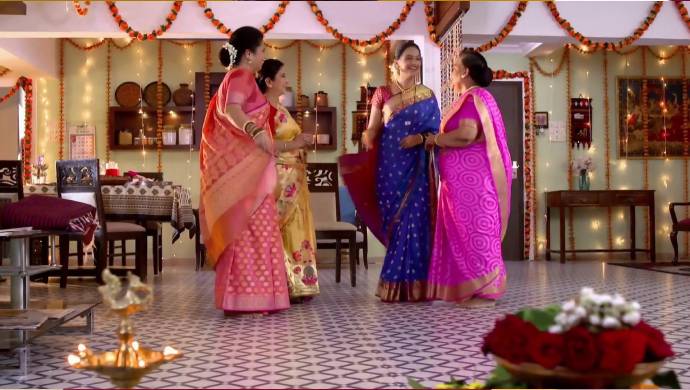 Meanwhile, Sulbha Kaku and Shubhra’s mother help Shubhra change her saree for the evening puja. Asawari comes home and everyone else follows, they perform the puja, and slowly, all women make excuses and leave without eating anything. Asawari feels sad but Shubhra consoles her and says that she will send the snacks to their homes.