Tula Pahate Re star Abhidnya Bhave is all set to get married to beau Mehul Pai and the pre-wedding celebrations have already kickstarted.

Tula Pahate Re star Abhidnya Bhave is all set to get married to beau Mehul Pai and the pre-wedding celebrations have already kickstarted. Bhave recently took to Instagram to share a series of pictures from her Mehendi ceremony and the fans cannot contain their excitement. She looks nothing short of a fairytale princess in her pre-wedding dresses and we honestly cannot get over it.

Watch the promo of Tula Pahate Re here:

In a series of Instagram stories, Abhidnya shared glimpses of her pre-wedding festivities on social media and she looks truly stunning. With a big smile on her face in almost all the pictures, the ‘wedding glow’ on the bride-to-be is truly evident. The 31-year-old actress opted for an elegant yellow Kurti for her Mehendi ceremony and a gorgeous green printed lehenga for other ceremonies. While she looks beautiful in both outfits, we must say that her floral head accessory definitely took the cake. Take a look at the pictures of ‘lit banno’ from her pre-wedding ceremonies below: 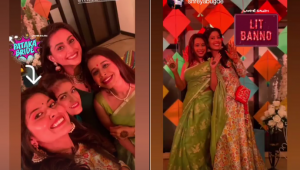 Keeping the COVID-19 protocols in mind, the invitation for the pre-wedding festivities was extended to a handful of guests. Only her family members and close friends were invited to be a part of the event and everyone was seen enjoying at Abhidnya’s Mehendi function.

As per her other stories, last week she was shopping for what seems to be her wedding gown and we cannot wait to see her as a bride. Abhidnya and Mehul got engaged in October last year and according to a leading daily, they are all set to tie the knot sometime around the first week of January.

The actress rose to prominence due to her role in Zee Marathi’s family drama titled Tula Pahate Re. She essayed the role of Myra Karkhanis on the show. Tula Pahate Re also starred Subodh Bhave and Gayatri Datar in lead roles and used to be one of the most popular Marathi TV shows of Zee Marathi.