Aanand L Rai And Akshay Kumar’s Chemistry Is Unrivalled; Filmmaker In All Praises For His Simplicity

Anand L Rai is all gearing up for his upcoming film starring Akshay Kumar, Dhanush and Sara Ali Khan. In his recent interview he went all praises for Akshay Kumar. Check out what the filmmaker had to say

Anand L Rai’s digital film has started at high speed and is anticipated to be at the top of the charts before Christmas. December 24 is the day for the release of this blockbuster film on digital platforms, which is projected to hit all sorts of records.

The film boasts amazing performances by Akshay Kumar, Dhanush, and Sara Ali Khan, and is directed by master storyteller Aanand L Rai. In reality, in Raksha Bandhan, the master storyteller will once again collaborate with megastar Akshay Kumar. The director-actor combo is reported to have a strong creative chemistry. 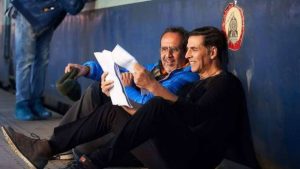 (Also Read: Director Aanand L Rai Shares Sara Ali Khan Is One Of The Finest Actor From The Flock Of Young Actors)

On Wednesday, the film’s trailer was unveiled. Dhanush’s character is seen to forcibly marry Sara, a fierce girl who is indeed in love with a different guy, played by Akshay Kumar. Although Dhanush is 12 years older than Sara, Akshay is shown 28 years older than her. Aanand addressed the outrage over his casting choice in an interview with a leading daily. Atrangi is a word that means ‘funnily strange.’ As per the filmmaker, if a director is patient while producing a picture, it is his tiny expectation that the audience would wait and understand why such a cast was chosen. Many of them have a tendency to pass judgement on others. The filmmaker wants viewers to watch the film for two hours and then respond to it.