These scenes from Kaagaz left a deep impression on our minds. Read on to find out if they affected you in the same way, too.

Kaagaz, a film that revolves around a common man’s battle against the bureaucratic powers, released on ZEE5 on January 7. Written and directed by Satish Kaushik, the film stars Pankaj Tripathi in the lead role. It is based on a true story of a man named Lal Bihari, from Azamgarh district in Uttar Pradesh. Since the film Kaagaz depicts a battle of 17 long years fought by a common man against the corrupt, it has some really hard-hitting scenes that get us thinking. Read on to know about them.

After Bharat Lal (Pankaj Tripathi) realizes that he has been declared dead on government records, he starts writing letters to government officials, and even reaches the Prime Minister. Every government official sends a reply saying that they will take action, but no one helps really. Bharat Lal then takes it upon himself and does something brave. He sits in the middle of the road holding a placard, while MLA Asharfi Devi (Mita Vashisht) is on her rally there. This scene got etched into our minds, making us think since Bharat Lal did not get any help from the MLA who claimed to be a people’s person but got it from a journalist who was present there.

When Bharat Lal approaches Lawyer Sadhuram Kevat, the lawyer tells him that there are many more like him who have been declared dead on legal papers. He takes him to an old man sitting there, holding a gun. He tells him that this old man was once a dangerous dacoit, who killed many people. One day he decided to surrender and swore to never use firearms again. When he got released from jail after his sentence, he realized that his brothers had him declared dead to take over his land. The man, to keep his promise, did not use his firearms and began a legal battle. The battle went on for 20+ years and he did not get justice. The thing that makes us think hard about his story is that after he dies for real, Lawyer Kevat says that while he was against the law, he was alive, and then when decided to be with the law, he was declared dead.

The Cop and the FIR 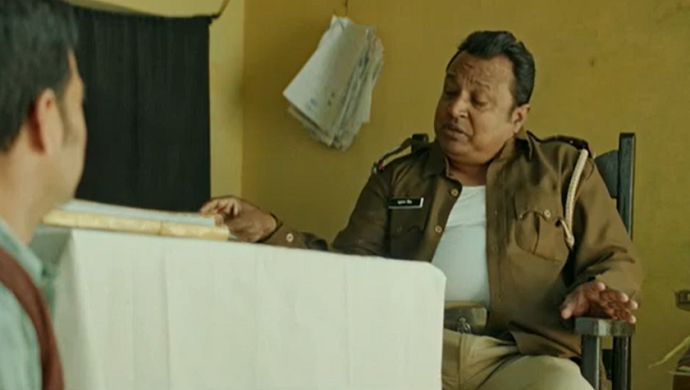 To prove that he is alive, Bharat Lal finds ways to get into police records. After failing to get an FIR filed against him, he decides to file an FIR himself, against someone. When he reaches the police station and asks them to file an FIR, the cop in charge does not even bother to hear him and asks for a bribe. Even after Bharat Lal gives a bribe, the cop sends him away without filing any FIR. This really makes us think and feel pity about the situation of law and basic rights of the people in parts of our country.

Also read: Kaagaz: Why Pankaj Tripathi Is The Perfect Choice For This Satirical Comedy Playing The Role Of ‘Dead Man’ Bharal Lal

MLA Asharfi Devi yet again shows that she wants to help Bharat Lal but does not help in real. In fact, there comes a scene when Bharat Lal organizes a rally with his Association of Dead People, to claim their rights. In this situation, the MLA’s assistant advises her to not extend any help and to just ‘wait and watch’ because either way, things will be in her favour. She agrees to this and does not bother helping.

Bharat Lal goes as far as to create a scene in the Vidhan Sabha, yelling at the government leaders that he is alive. The security guards escort him out and beat him up very badly. This saddens us and makes us question what a man needs to do to make himself heard and how everyone refuses to hear people out in any manner.