5 Years Of Dear Zindagi; Alia Bhatt Celebrates In A Unique Way – DEETS INSIDE

Dear Zindagi has been one of the most amazing movies in the industry. As the movie clocks 5, Actress Alia Bhatt uniquely celebrated the occasion. Check out Alia’s heartwarming post

Dear Zindagi, which was released five years ago today and was probably the first big Hindi film to depict a person battling with mental health in a realistic, everyday setting. The Alia Bhatt and Shah Rukh Khan movie, directed by Gauri Shinde, hit theatres in 2016 and was well-received by both fans and critics.  November 25th marked the fifth anniversary of the film, and Alia Bhatt is celebrating in a very unique way. A few moments ago the actress turned to Instagram stories and presented a portfolio of photos and videos that included fan-created art and video edits. 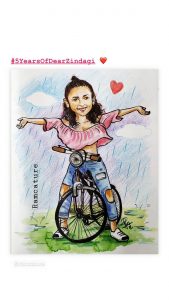 The actress shared several fan-created photos and videos. One artwork depicted Alia’s film character riding a bicycle, while another depicted a scene from the song ‘Tu Hi Hai.’ Another image included a line spoken by Shah Rukh Khan’s character, Dr. Jehangir Khan, a therapist, in the film. When Gauri Shinde created Dear Zindagi, she changed the direction of many of our lives. 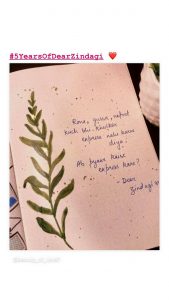 The film taught us many life lessons and motivated us in several ways, and it continues to do so to this day. The film taught us that if we don’t weep our hearts out, we won’t be able to laugh freely. A film that most of us continue to watch over 5 years after its release and feel great about our lives after hearing life lessons from Dr. Jehangir Khan (Shah Rukh Khan) surely struck the right chords in our hearts. The film completes another year of drastically altering our lives in a variety of ways.

(Also Read: RRR: Alia Bhatt’s On-Screen Contribution In The Film Will Astonish You- DEETS INSIDE)

Dear Zindagi also taught us that most of us believe that if we want to achieve anything larger in life, we must work hard and take the hardest path. But we forget that it is not always essential to attain large things by choosing a tough path; we may also achieve our goals by following an easier path.