1 Month of Taish: From Hilarious BTS Antics to Sharing Favourite Dialogues, See How the Cast of the Series is Celebrating

The cast of Taish celebrates one month of release. Also, see a few behind the scenes goofy photos and videos of the cast.

Its been a month since Taish premiered on ZEE5. The Taish cast has received a lot of positive response from the audience. Recently, the cast took to their Instagram to celebrate a month of their release. Take a look at some of their old BTS photos and videos and them celebrating one month release anniversary.

Taish has garnered its cast a huge following ever since it has been streaming on ZEE5. The show became extremely popular because of the funny scenes combined with some romance and the action-packed drama in the series. Writer and director of the series, Bejoy Nambiar, took to his Instagram to share a post celebrating one month of release. The poster was also shared by all the other cast members of the show. Take a look at it: 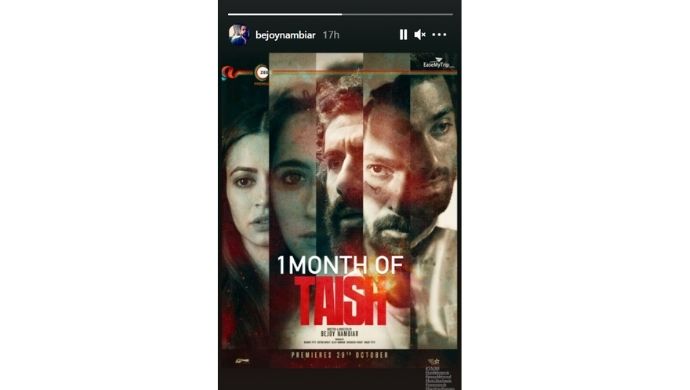 Jim Sarbh on the other hand shared a BTS from the shoot of Taish. Pulkit Samrat and Jim were seen practising their lines in the video. They were dressed in boxers and bathrobes and danced while they were reciting their lines.

Ankur Rathee shared a BTS video on his Instagram. In the video, Jim was dressed as the dictator and made a hilarious commentary saying that he was Alladin. Harshwardhan also shared a photo captured during the shoot of Taish. He was seen posing with the extras in the photo. Harshvardhan flaunted his biceps while the others too looked extremely muscular. Take a look at the video and photo here:

Harshvardhan Rane also shared a few BTS videos from the shoot. He was seen playing basketball with Jim Sarbh and the crew. He wrote,”Haule se chala raaton ke pare” which is a line from the lyrics of the song Roshni Si. He was also seen playing well on the sets in a previous video where he added the song Re Baware from Taish in the video. He scored a basket while playing with the crew in the BTS video. Have a look at the basketball videos here:

In one of the BTS videos shared by Pulkit Samrat, he was seen posing like a mannequin. The video was captured while the party scenes in Taish were being shot. Pulkit is seen wearing a grey overcoat, white shirt and grey pants with a dark grey tie. He also wore a pair of funky glasses to complete the look. Kriti Kharbanda on the hand, who is dating Pulkit in real-life, shared a photo of her reel life partner. Jim who played Rohan in Taish was seen going down on knees to ask Kriti’s character to marry him. However, it seems like the two couldn’t hold their laughs back when this picture was captured. She wrote, “Of cold nights and rehearsals with Rohan :)”

Finally, Jim Sarbh shared a photo from the wedding in Taish. Ankur Rathee who is supposed to get married in the series is waiting for Jim to dive in. Jim takes a huge leap before diving into the pool. Take a look at the photo where everyone seems shaken by Jim’s hilarious act.

Watch Taish streaming only on on ZEE5