Govinda, the finest actor in the Industry felt thankful that he has achieved very much in the last 35 years in the Bollywood Industry – Read on to know more

Today marks the actor’s 58 birthday. He was overheard discussing his experiences in the Bollywood industry. He went on to say that all of his work in the industry helped him serve his family, and as a result, he was able to launch his own cinema brand. He is also pleased that he was able to introduce new people to the film industry, and he believes that they are all doing well. He stated that wherever he goes, he finds all of the people who are a part of his life. Because the actor is moving slowly in comparison to the film but has composed great songs, he also wanted to sing and perform on his songs. He also stated that he is looking for some large projects with great filmmakers. 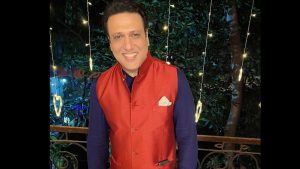 When asked about his birthday plans, the actor stated that he intends to visit a temple dedicated to a goddess. He goes to a temple whenever he misses his mother. He usually goes alone, but this time he asked his wife to accompany him. He stated that they will perform a pooja together.

Govinda debuted in the Bollywood industry in 1986 with the film Illzam and has since appeared in 165 films. He is also ranked as the tenth greatest star of the last thousand years. Not only that, but the actor has won several awards for the fundamentals of his wonderful acting skills, dance moves, and great comedy.

(Also Read: Govinda Birthday: The Fashion Icon Who Created A Niche For Himself With His Bizarre Ensembles; You Can’t Imagine What He Pulled Off)

In 2004, Govinda joined the Congress Party and was elected to the Lok Sabha from Mumbai by 50,000 votes over the incumbent’s five-term term. Govinda decided to leave politics and focus on his Bollywood acting career on January 20, 2008.